"There is no chasm too wide, no wall too thick, that will stop me from bringing you home."
— Ace

Born in a quiet but historic village, Haugland benefited early on from high praise and a lack of competition. Consistently the best at whatever he set his mind to, he easily imagined himself as an admired pediatric surgeon and enrolled in medical school. However, he soon discovered that memorizing theory wasn’t to his liking and instead opted for paramedic training in order to get into the action more quickly.

The Norwegian Armed Forces brought him into a new world of achievement. He completed basic training and joined the Norwegian Home Guard, where he acquired a reputation for heroics. After completing his service obligation, he was accepted into the Forsvarets Spesialkommando and took part in a prominent hostage rescue soon afterward. As part of a joint UN operation in Somalia, his tendency toward theatrics and his impulsive nature resulted in him saving Kali's life. The offer to join NIGHTHAVEN swiftly followed.

Haugland's love of demolitions and humanitarian efforts led Anja "Osa" Janković to develop his signature Selma Aqua Breacher. Haugland was later instrumental in the construction of NIGHTHAVEN's R&D facility In 2020, Haugland was recruited into Rainbow with the help of Kali. He later participated in the Six Invitational 2021 and was placed on Team Capitão. Despite this, he still participated in several of NIGHTHAVEN's training exercises within the Stadium. During one such exercise, they were joined by Shuhrat "Fuze" Kessikbayev, whom Kali had attempted to recruit. She also showed off Osa's newest invention to Fuze, dubbed the Masterframe Prototype I.

Months later in the middle of 2021, Haugland was at NIGHTHAVEN's R&D facility and was flirting with their senior physicist when he noticed Osa. Haugland hopped into her vehicle and asked if he could borrow one of her inventions for a photo to post on social media. Osa refused, citing how expensive they were, prompting Haugland to ask why Rainbow was allowed to test them. Janković told him that Rainbow would pay for any broken equipment and that making them feel at home was part of Kali's plan. This led Haugland to ask her what Kali's "big plan" was as he felt he had a right to know due to his part in constructing the R&D facility. Osa refused to tell him anything and told him he should focus more on winning the upcoming Invitational instead of showing off to her staff. She then tricked Haugland into taking an embarrassing photo and threatened to make it go viral if he continued bugging her staff. Haugland pleaded with Osa not to tell Kali as she received a message calling for her to travel to Greece.

In early 2022, he and his fellow Nighthaven operatives were placed on Team Kali for the Six Invitational. At the conclusion of the event, Kali officially cut ties with Rainbow and managed to recruit all of the Rainbow operatives on their team into Nighthaven. Haugland and the other Nighthaven operatives supported Kali's decision and left the organization as well.

It takes a certain kind of person to put themselves on the frontline of disaster relief services, and at first glance Specialist Håvard “Ace” Haugland doesn’t fit the profile. He’s arrogant, brash, and self-interested. Yet his outward image is based entirely on altruism, and his social media following reflects his desire to be perceived as the ultimate upstanding citizen. He has a certain hunger, not just for medical emergencies and extraction, but for positive publicity. […]

I gather his love of attention comes from growing up in a small village, where he was regarded as something of a local hero. I was surprised to learn of his early ambition to become a pediatric surgeon – a role he seems to regard as the pinnacle of social standing. Given his preference for the practical over the theoretical, however, I’m not surprised he pursued paramedic training instead. His conscription into the army and subsequent role as combat medic only further reinforced his “golden boy” image. […]

The man himself, constructed as he is around his desire to tightly control how he’s perceived by others, remains somewhat of a mystery. His persona drives him to be congenial and to excel in working closely with his peers, at least until the time comes to give a post-mission interview. But behind the façade there is a struggle that I wonder if Haugland is aware of. Certainly if he has insecurities they’re in no way crippling, but it is strange to attempt to analyze someone who so fully inhabits their surface-level traits.

He enjoys exploring the world for the photo opportunities such travel provides, but he maintains that his heart remains in Norway. I do wonder though, whose approval he’s trying to gain, and whether success is even a possibility. […] When I asked about his long-standing association with Specialist Jaimini Kalimohan “Kali” Shah he was quick to sing her praises. I believe that she’ll retain his loyalty for as long as he’s committed to fame and fortune, but I fear for their relationship – and his mental health – should he ever truly sate his desire for acclaim.

You asked me to consider our newest recruits. They’re interesting on paper, but it is in person we are introduced to their strengths. I can see where perhaps I can teach them something useful, yes?

The man from Norway, Håvard Haugland. His name is hard to pronounce, but he’s easy to recognize. We call him Ace. It’s interesting that a paramedic would eventually work with the UN, and fortunate for Kali that they crossed paths. His time with the Norwegian Armed Forces has honed his rescue skills. As an EMT, he projects a calm - if arrogant - confidence in even the most stressful situations. Whether he's gingerly making his way to a trapped avalanche victim or tending to a broken bone, Ace is capable of making those in his charge feel safe and secure.

He can seem brash, but it’s his assertiveness that allows him to take on these dangerous missions. Perhaps a tempering influence would allow him to reflect upon situations before rushing in. He does enjoy his social media, and his followers from around the world see him as the hero he wishes them to see. I admit after meeting him, his skills live up to the hype.

Thandiwe “Melusi” Ndlovu and I have specific principles in common. I admire her commitment to conservation and her anti-poaching unit. I don’t see her being taken by surprise often, and when she is? I would very much like to see her reaction.

I agree with you, her focus on prevention through surveillance is something The Program can benefit from. I don’t doubt her experience with drones, but have you seen Melusi track a poacher on foot? Even I would have trouble spotting her among the trees.

That these two join us at the same time is exciting. Their weapons of choice are also interesting, and, I think, reflect their true selves. Ace rushes in and makes an entrance - an entrance through almost any barrier. He’s ambitious, but he goes to lengths to make sure none are harmed by his actions. Poachers have militarized, changing their tactics and equipment. As a result, Melusi must be highly adaptable. She waits, she intercepts, and she prevents, much like her new toy. If she does not catch the target herself, she can slow them long enough to be intercepted by someone else, or perhaps discouraged from their actions.

It will be interesting for me to continue to work with them. Melusi is very much a warden. She watches, she defends, and she gets the job done. Ace knows where to stand for the perfect shot, whether it’s creating a breach for his teammates or smiling for the camera.

We wouldn’t blame you if the term breaching makes you think of fiery explosions. If not with a hammer or a spark, walls have mostly been compromised by fire so far. With Ace, that’s about to change.

With the S.E.L.M.A. Aqua Breacher, water is the name of the game. It makes use of hydraulic pressure to burst through breakable and reinforced surfaces. The cylinder is thrown on whatever Ace is trying to breach, and then it opens to fully deploy. It explodes one time on floors, ceilings and hatches, but on walls the cylinder rolls down to deploy two times, if space allows. Each of these deployments leaves a clean rectangle breach, combining to create a hole big enough for an Operator to go through easily.

The S.E.L.M.A. is quite versatile in nature and with multiple units available to Ace, its ability to be thrown at any height makes him an incredibly reliable hard breacher.


I've reviewed my fair share of climbing equipment, Ace's S.E.L.M.A. surprised me. Auto-belayers have some application in civilian/hobby spaces but need to be hand-placed - that's where the S.E.L.M.A. is unique.

The casing ejects a telescopic spike (piton) on sudden deceleration. Some practice is required to ensure the device is optimally placed on contact, but I achieved relative competence after only a few sessions familiarizing myself with its heft and aerodynamics properties. The spike is attached to a pellet, containing both water and explosive, which stays behind as the "mother" descends to the next breach point, while the pellet unfolds and primes for detonation.

It's an efficient tool, designed to open walls and other vertical surfaces with minimal risk to the user, and anyone awaiting rescue. The size of the hole it creates is effective for search-and-rescue operations, while inbuilt sensors monitor the dept of the deployed piton, measuring hardness and contesting activation where the structure behind the device is likely to be load-bearing.

It's an example of specialized tech from the private sector that does one thing, and does it well. We're lucky to have the chance to try it out in other contexts. 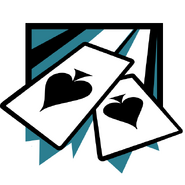 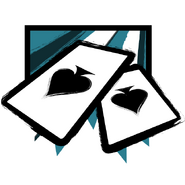 Ace and Melusi in the official Steel Wave release 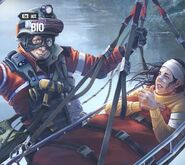 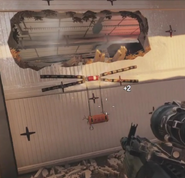 Ace from the Crystal Guard Trailer