< Alibi
View source
watch 02:59
Metroid Dread - The Loop
Do you like this video?
Play Sound

A Light Armored Operator, Alibi carries three Prismas, special devices that project volumetric displays of herself. If an enemy were to interfere with the program, they will activate a tracking feature that will cause the victim to be detected for a short while.

Specialist Pichon and I worked closely with Specialist de Luca in fine-tuning the Prisma. The device is complicated and I doubt you'd be able to follow all the technical expertise that went into crafting this device, so I'll keep it simple.

Once it's thrown and unfolds, the Prisma projects a realistic image of Specialist de Luca, drawing enemy fire and even showing the origin of the shot. This is critical when trying to fool the enemy into committing a tactical mistake.

The Prisma is not a holographic projector, it's a volumetric display. Big difference, and much more impressive when you realize how hard it was to make this work. The Prisma uses laser light to suspend dust-like particles in the ar by changing air pressure. The pre-generated image of Specialist de Luca is then projected on that dust screen from multiple angles, creating a 2D model on a 3D frame. It looks entirely real, and much better than anything a hologram can do. We're talking an image at over 1600 dpi. If you knew photography, you'd be awestruck.

The image is static, of course, but we managed to add a tracking feature that instantly marks the origin of the round that interrupts the projection. That was Specialist de Luca's suggestion, and it's pretty smart for someone without an engineering degree. 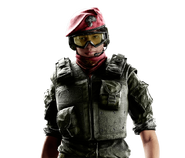 Close-up of Alibi about to deploy her Prisma

Alibi armed with an ACS12 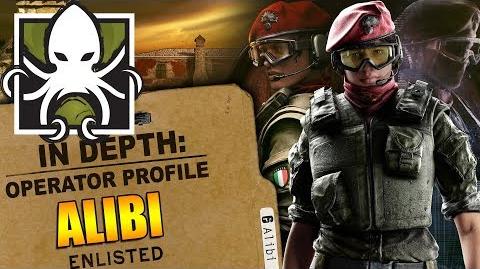