Aria "Alibi" de Luca is a REACT operator appearing in Tom Clancy's Rainbow Six Extraction. She is unlocked by default.

Years of deep-cover work dismantling organized crime rings with the Gruppo Intervento Speciale (G.I.S) shaped Alibi into a premier R6 operator. She volunteered for REACT, knowing her network infiltration skills would be useful. She brings the PRISMA volumetric display device to the table, a useful tool for drawing hostile Archæans in and identifying enemy positions.

Team cohesion will be enhanced by De Luca letting down her guard with her fellow Operators. This may be negatively affected by the increasing stresses of the mission. Undefined: requires more data. (INSERT: HR - She's conscious of this and has already reached for support. @INDEX)

A Light Armored Operator, Alibi initially carries two Prismas, special devices that project volumetric displays of herself. Once a decoy is deployed, it is used to lure and distract any enemies in the area. Enemies that attack the decoy become scanned. Enemies that are actively engaging players will stop to start attacking the decoy. This can be invaluable when attempting defensive mission objectives such as Triangulation or Sabotage. 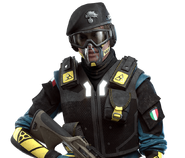 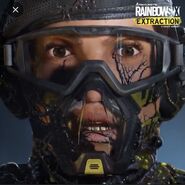