Amersterdam is the fourth mission in the PC version of Tom Clancy's Rainbow Six: Lockdown. The mission's console counterpart is Operation Backlash.

Onsite coordinator: Alistair Stanley
The World Bank Conference is underway in Amsterdam. The New Freedom Army detonated a bomb outside a police station. Terrorists then stormed the police station, raided the Armory and took hostages. Secure the Armory, rescue any hostages and escort them to extraction zone.

A group calling themselves the New Freedom Army attacked the World Bank Conference in Amsterdam this morning. They detonated a bomb hidden in a charter bus and in the ensuing chaos stormed the police station. They managed to reach the station's armory. Your orders are to secure the armory and rescue any hostages they've taken. Chavez, you'll be taking Price, Loiselle, and Raymond. Rainbow Five out. 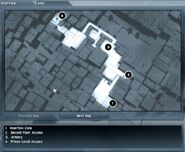 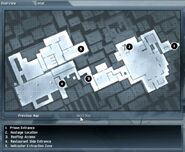 Amsterdam Mission Walkthrough
Add a photo to this gallery

Retrieved from "https://rainbowsix.fandom.com/wiki/Amsterdam?oldid=72523"
Community content is available under CC-BY-SA unless otherwise noted.