"Why? You want to know why? Ha hahahaha! Isn't it obvious? You don't treat the symptoms; you treat the disease. There's only one real solution to problem of pollution, and that's to get rid of all people."
— Anne Lang

Anne Lang is the secondary antagonist of Tom Clancy's Rainbow Six. She served as the United States Presidential Science Advisor and was secretly a member of the Phoenix Group.

Anne Lang was is a great-granddaughter of Avery Lang, former governor of Massachusetts. She attended Cornell University in the 1960s where she met John Brightling through the same student organizations. In 1968, she earned a BA in Political Science. She was active in protests against American involvement in Vietnam and environmental issues. In the 1970's, Lang worked for a variety of non-profit environmental organizations. She joined the Environmental Protection Agency (EPA) as the Assistant Administrator for Policy, Planning, and Evaluation in 1980. While at the EPA, Lang was responsible for a number of policy initiatives, including the National Wetland Preservation Project and the Ogallala Aquifer Deep Survey. Following the death of her father in 1985 she inherited a sizable personal fortune. Lang left the EPA in 1992 to act as administrator of the International Rainforest Fund, but returned to the federal government in 1996 when she was appointed Presidential Science Advisor under the current administration.

Due to the growing threat of environmental pollution, Lang sought to find a way to end it once and for all. She later became reacquainted with John Brightling and learned of his plan to develop a virus to wipe out humanity. The pair believed that the best way to end pollution was to stop those who were creating it. Lang used her new position in the U.S. government to funnel research funds into the John Brightling's Horizon Corporation and shield them from unwanted scrutiny.

On April 15th, Hutu Rebels attacked the Horizon's Congo research facility and took Dr. Catherine Winston hostage. After Rainbow rescued her, Lang and Brightling served as advisors on several missions. On August 3rd, Brightling and Lang framed Ramon Calderon for kidnapping nationals from Horizon Ark. This was done to redirect Rainbow from investigating the true purpose of the Rainforest 2000 initiative in the future.

A month later, Rainbow recovered Roland Kunst who informed them that the American cell of the Phoenix Group had gotten their hands on a bioweapon and that they were operating out of a facility in Idaho. Anne Lang attempted to prevent a Rainbow operation to raid the facility by questioning the validity of Kunst's information. After she was unsuccessful, Lang tipped off Brightling who then had the samples of the Ebola Brahma virus taken to a nearby airstrip for transport. Rainbow was able to recover the samples and sent them to their headquarters for Dr. Winston to analyze. Unfortunately, the chaos that occurred from the raid resulted in the US banning Rainbow from conducting operations in the country indefinitely.

On September 19th, Dr. Winston discovered the virus samples were virtually identical to the ones she had examined in the Congo. She then contacted Anne Lang and told of her belief that the Phoenix Group had someone working from within the Horizon Organization. Lang responded by telling Dr. Winston not to tell anyone of her discovery and that she would handle it. She did so by having the Phoenix Group recover the samples and kidnap Dr. Winston and hold her hostage on The Orca's Smile. Rainbow was able to rescue Dr. Winston and learned of Lang's treachery and Brightling's potential involvement.

On September 23rd, Rainbow bugged Lang's home in Alexandria, Virginia and was able to confirm that she was conspiring with Brightling to release the Ebola Braham virus. Rainbow raided the Horizon Corporation's headquarters in San Francisco on September 26th. Horizon's files revealed that the Phoenix had infiltrated Global Security and intended to release the virus at the closing ceremonies of the Sydney Summer Games.

Lang traveled to Brazil under the guise of inspecting research stations involved in the Rainforest 2000 imitative. On September 30th, Lang planned to have the Phoenix Group take her hostage so that she could go into hiding in a biodome while the virus was released. Rainbow was able to apprehend and take Lang into custody. On October 1st, Rainbow foiled Brightling's plan to release the virus and captured him and the remaining Phoenix Group members. Anne Lang was later found guilty of treason in the United States and is sentenced to life in prison.

Lang is career bureaucrat. She has powerful contacts in both the government and the environmental lobby, and has a reputation for accomplishing the impossible. Ruthless and idealistic. 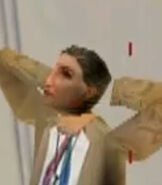 Add a photo to this gallery
Retrieved from "https://rainbowsix.fandom.com/wiki/Anne_Lang?oldid=67041"
Community content is available under CC-BY-SA unless otherwise noted.