Edit
watch 02:56
Raise a Floppa - The Loop
Do you like this video?
Play Sound
This article features a Codex entry.

An Apex is produced by the Chimera Parasite when faced with extreme threats to its existence and the need to produce a large number of organisms in a short amount of time is required. The Apex is capable of bypassing Nest germination by spawning other Archæans from surrounding Sprawl.

While rare, Apexes are produced during the initial infestation stage of the Chimera Parasite by infecting and mutating humans. This causes infected individuals to grow large carapace spikes out of their backs and tendrils to help them move quickly.

Once the Chimera Parasite has effectively assimulated enough organic matter, it will use Sprawl to start producing Archæan Apexes in lieu of human Apexes. Due to its higher durability compared to its human counterpart, an Archæan Apex does not have spikes protruding from its back but still retains a humanoid appearance.

The tendrils raising the Apex of of the ground enable it to move with ease. When confronting hostiles, the Apex will attempt to keep its distance and will shoot projectiles made up of high-energy Sprawl similar to the Tormentor that cause a blinding effect. When confronted in close-quarters, a proximity-triggered defense mechanism activates, resulting in a concussive blast. It is speculated by REACT scientists that the blast is composed of energized Sprawl. 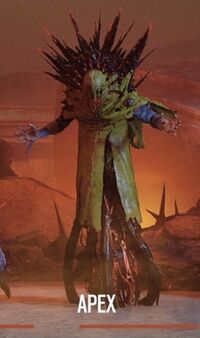 Apexes make their first appearance in the Outbreak event. They are the "leaders" of the Roaches, as they are able to call in waves of hostile Grunts and Breachers that are stronger than the normal bunch.

The Apex fight from the backline as they summon Grunts and Breachers. From a distance, they will shoot blinding projectiles that block vision and prevent Aiming Down Sights. And if an Operator gets too close, the Apex will knock them away a good distance. 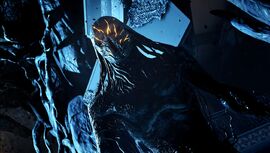 "This abominable summoner can call on other Archæans to fight by its side. Devise tactics to eliminate this top predator."
— Site description

Apexes are Tier 4 enemies that appear on higher difficulties in Tom Clancy's Rainbow Six Extraction. They are capable of summoning other Archæans without the need of Nests.

Apexes are the leaders of lower tier Archæans. They should be taken out immediately due to their ability to spawn enemies quickly. The Apex will tend to stay in the rear and shoot projectiles at players, similar to the Tormentor. Apex projectiles have the added effect of obscuring vision if hit.

Players should avoid getting too close to the Apex as doing so will cause them to unleash a damaging blast that will disorient them. Additionally, the Apex is the only Archæan that is immune to Takedowns when unalerted or stunned.

Teamwork is essential when engaging with an Apex. An effective way to kill an Apex is by having one or two players focus on the other Archæans while the third solely focuses on the Apex. An Apex's weak point is its head though it is capable of sustaining large amounts of damage. Explosive gadgets or abilities can deal large amounts of damage to an Apex quickly. An effective healer will also be invaluable in preventing players from being downed during Apex engagements. The use of the Paralysis Grenade is also an effective way to immobolize an Apex and dispatch it quickly. 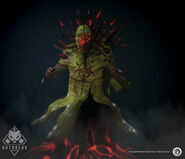 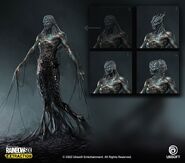 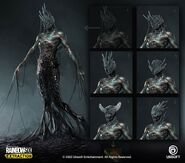