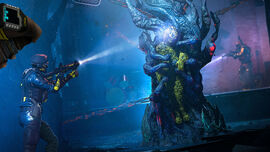 An Archæan Tree is a large biomass structure made up of Chimera Parasite cells. Its purpose is to hold organic lifeforms captive in order to absorb them. The Archæan Tree plays a central role in the MIA Rescue objective in Tom Clancy's Rainbow Six Extraction.

An Archæan Tree is created by the Chimera Parasite for the purpose of assimulating organic matter for energy and nutrients within a Chimera biome. Once an organic lifeform has been captured by an Archæan, they will be forcibly taken to an Archæan Tree to be held for an incubation peroid before they are eventually assimulated. This is evidenced by the presence of human DNA taken from samples of Sprawl. During assimulation, victims are held in place with hand-like structures that will constrict if any attempts to escape are made.

While the assimulation process is normally fast, it is stopped entirely if the victim is covered in REACT FOAM. To counteract this, the Archæan Tree will grow a series of roots that will actively try to pierce the protective shell. Each root features an anchor point resembling a flower to hold it in place and absorb energy from the surrounding Sprawl. This energy is then transported from the anchor point to the tree by the root tendril. Paleobotanical investigation has determined the tree's unique flowering shares DNA with the prehistoric genus Strychnos from 30 million years ago. As a result of this response, it is imperative that captured individuals are rescued as soon as possible.

Further mutations of the Parasite have resulted in the creation of the Toxic Tree. While similar to a normal Archæan Tree, it does not hold organisms captive but instead produce a purple fog with hallucinogenic effect. 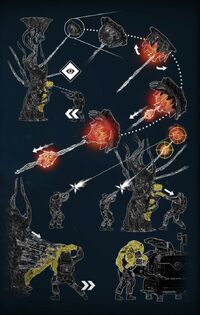 Archæan Trees hold MIA Operators captive during the MIA Rescue objective. Once an attempt is made to remove the Operator, a "tug-of-war" bar will appear on the screen. An energy bar for the tree is displayed on the left and will slowly deplete as a player continues to pull. Anchor points around the tree will open up to release energy that will travel toward to tree to replenish its energy.

To prevent energy from being replenished, players must destroy energy before it reaches the tree. This process can be sped up by destroying anchor points which become vulnerable to damage when they open up and glow to release energy. The Archæan Tree will sprout new root anchors if too many of them are destroyed.

Should it take too long to remove an Operator, they will be absorbed into the tree, failing the objective. Alternatively, should the tree's energy becomes too low, the removal speed will increase, allowing for a successful rescue. 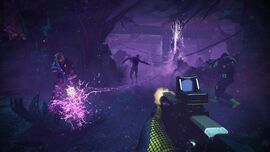 The Toxic Tree is available in the Nightmare Fog Crisis Event. It is always present in the Removal objective in the third subzone. The most notable feature of the Toxic Tree is its ability to create a purple fog that spreads to all subzones. This fog severely limits vision like Chimera Fog and causes hallucinigenic effects depending on a player's exposure level.

Players can counteract the effects of the Fog by picking up Neurostims which will reduce their Neurotoxin levels by 35%. Neurostims are located in safe zones around a subzone, including airlocks. These safe zones are free of the Fog and will allow players breathing room to resupply and engage enemies without increasing their exposure level.