Armor and Speed is a determining factor for an Operator's likely play style, although they do not need to abide by it. If they are Light Armored, they are geared towards quick plays, such as hit-and-run or rush tactics. On the other end of the spectrum, Heavy Armored Operators are more obligated in hunkering down, as they perform better at defending a position than moving with their slower speed.

Multiple sources of damage are not affected by Armor Rating, such as damage from gadgets (eg. hits from Twitch's Shock Drone), along with fall damage. Bleedout time does not change either between Operators of different Armor Ratings. 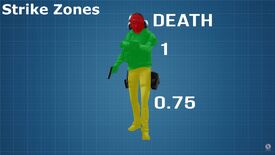 Strike Zones define how much damage an Operator (or any enemy) will take based on where they were hit. Each Operator has three "strike zones": the Head, the Body, and the Legs.

An Operator's Armor or Health rating determines how much damage they can sustain before either being killed or entering DBNO.

Tom Clancy's Rainbow Six Siege utilizes the new Health system. In this system, Health (HP) has replaced Armor and removed previous damage resistances. Health ratings along with how damage is taken in Strike Zones should be taken into account when engaging in firefights.

The game has three Health ratings:

Any heals can heal an Operator up to their maximum Health value for the duration of the round. Rook's Armor Plates will buff an Operator’s maximum HP by 20 until the end of a round.

Tom Clancy's Rainbow Six Extraction utilizes a modified version of the original Armor rating system found in its predecessor. Armor ratings determine how much resistance an Operator will have to damage but will not affect how much Health they have. These damage resistance multipliers will stack on top of the Strike Zone multipliers.

Base Armor ratings can be further increased by obtaining Operator Advancement levels through experience earned from gameply. This becomes essential to completing incursions on higher difficulties.

Rook's Armor Plates offer an additional 20% damage reistance and will cause an Operaror to enter DBNO instead of KO status once critical damage is taken.

In Tom Clancy's Rainbow Six Extraction, Four and Five Speed ratings have been introduced to further increase movement speed. These ratings can be obtained by earning Operator Advancement levels.

Light Health Operators take the full damage of a weapon but can traverse the fastest. Specializing in movement over defense, these Operators have an affinity to hit-and-run and roaming tactics.

Medium Health Operators are the Jack-of-all-Trades of the three Health ratings and traverse at a decent rate. Specializing in versatility above all else, these Operators are suited for the changing, dynamic tides of Siege.

Heavy Health Operators are slow, but have the most health. They are more suited to holding down areas with their better durability, these Operators are better used for straight, one-on-one engagements and defending locations. 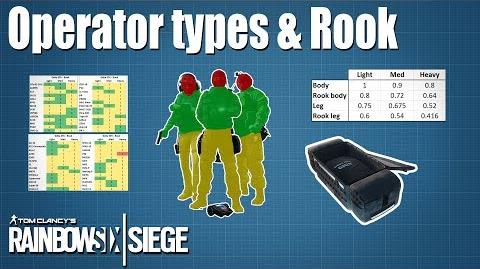