Start a Wiki
watch 01:09
Rainbow Six Profile: Ash
Do you like this video?

"When I was little, my savta taught me that 'Silence was a women's best garment'. But, I have to admit, I never really took her advice to heart."
— Ash

Eliza "Ash" Cohen is an Attacking Operator featured in Tom Clancy's Rainbow Six Siege. She is the acting leader of Forward Operations in Rainbow.

Cohen's mother is a renowned Jewish political activist and professor while her Palestinian father is a professor of Middle Eastern Studies. Cohen was raised in Israel, excelling in Mathematics and Physics. She earned a degree in Structural Engineering at Tel Aviv University and spend a few semesters at Boston University.

Cohen then enlisted in the Israeli Defense Forces (IDF). After undergoing the rigorous twenty-two month training for the elite Air Force unit, Shaldag, she served five years. Skilled in ground and airborne operations, all-weather and all-terrain navigation and reconnaissance, she was invaluable in Operation Orchard. She was later transferred to FBI SWAT due to an international law enforcement exchange program. Cohen applied her degree in Engineering and gift in structural resistance to develop advanced demolition tactics and equipment. Along with Hebrew, Cohen is fluent in Arabic, English, French and Greek.[1]

I had several meetings with Specialist Eliza "Ash" Cohen before I gave up on convincing her to not see me as a commanding officer. She asked so many probing questions, it was starting to feel as though she were analyzing me.

Cohen isn't interested in discussing her childhood. There's resentment toward a judgmental grandmother, but no lasting trauma. Military service acted as an escape from family tensions and appealed to her ordered and focused personality. Cohen added that she appreciates high-risk, high-reward scenarios, but didn't elaborate on what level of personal risk is acceptable.

Her identity is intertwined with her military training and operations. Extracting anything personal from the tangle is difficult. Cohen is cautious and doesn't cultivate many close relationships. Her bond with Specialist Miles "Castle" Campbell is therefore important to her - and I would say to the team as well. It's certainly a good pairing. Campbell's amenable personality enables Cohen to step out of her comfort zone without feeling self-conscious or judged.

Cohen uses other people's assessments to describe herself: She told me that Specialists Dominic "Bandit" Brunsmeier and James "Smoke" Porter tell her she's too serious," while others describe her as "intense," and that she enjoys being proven right. So I asked if she thought those descriptions were accurate. She told me that she only cares about whether the other operators respect her. I'm confident they do.

On operations, Cohen is exemplary: She thinks fast, and her aggressive style almost always puts her at an advantage. During debriefs, however, I've noticed a different kind of focus. The residual stress of combat causes her to dwell on every misstep, perceived or real. Self-evaluation is understandable from someone so highly skilled, but it also has an effect on her team. It's important to encourage her to process the events as a joint effort and not simply assume the critique alone. Cohen - like all operators - knows there will be situations she can't prepare for. And yet, she alone allows the stress of the unknown to eat at her. This will need to be addressed.

A Light Armored Operator, Ash comes equipped with the M120 CREM. It can shoot up to two Breaching Rounds, which will burrow into a surface and detonate automatically.

"Fires an explosive Breach Round that burrows into a surface and automatically detonates."
— M120 CREM Description

The M120 CREM was developed as a portable projectile breaching weapon. Similar to other explosive breaching tools used by American and Israeli armed forces, the M120 CREM is capable of breaching through doors without the need to focus on destroying hinges or locks for entry. Unlike other explosive breaching methods, the M120 CREM is comparatively portable with its decreased size and weight, allowing it to be carried as a secondary weapon. The M120 CREM has been successfully utilized by FBI SWAT in penetrating fortified compounds during hostage and search and rescue operations.


Specialist Eliza "Ash" Cohen was not thrilled when she saw me examining her M120 CREM Breaching Rounds. She paced around me like a leopard stalking prey. I'm the Director, I'm perfectly capable of being professional. Specialist Cohen is very hands-on and from the start she directed the design and function of the M120 CREM. Up close, I can see that it's well-designed. What surprised me was how the titanium drill bit is designed like a threaded needle so that it "injects" the detcord into the surface. That explains why the damage zone is so effective. If there's another counter besides Jäger's Active Defense System, I'll find it. In the meantime one strategy that works pretty well is knowing that Miss KickInTheDoor tends to get caught up in her own hype and rush ahead without enough intel. My examination of the M120 CREM provided some solid insights, plus it was fun. Ash seemed worried that I might mess with it. I don't need to flip switches on her gear to win.

Ash armed with a G36C

Ash armed with an R4-C 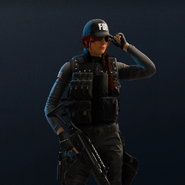 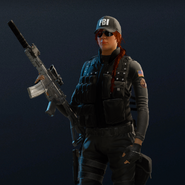 Ash armed with an R4-C (Chimera)

Ash armed with a G36C (Outbreak) 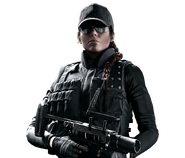 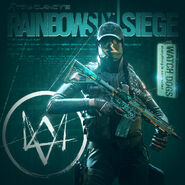 Ash in the Watch_Dogs Set

Ash in the Spring Break Bundle

Ash in the Taipan Bundle

Ash in the Engineering Set

Ash in the Rancher Bundle

Thermite, Castle, Pulse and Ash in the Ranger Bundle

Ash in the Undead Bundle
Add a photo to this gallery

Ash's Icon
Add a photo to this gallery 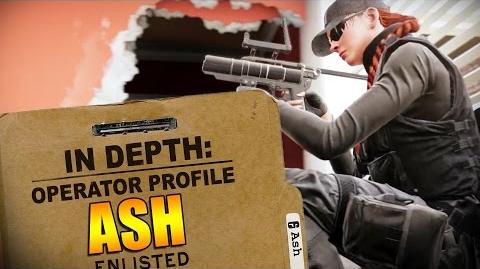 Retrieved from "https://rainbowsix.fandom.com/wiki/Ash?oldid=70833"
Community content is available under CC-BY-SA unless otherwise noted.