The Auto-Turret is a gadget featured in Tom Clancy's Rainbow Six Extraction. It was introduced in the Crisis Event, Spillover.

The gadget was unlocked by completing the Calibration Crisis Event Study which required players to kill 500 enemies with their primary or secondary weapon and could be completed collectively as a squad. After March 10th, 2022, the gadget can only be unlocked in the in-game store for 10 REACT Credits.

Once placed, it will deploy a turret that will automatically fire at enemies within range. The turret's can only rotate 60 degrees in front of it which is displayed when placing it. The turret has a total of 60 rounds.

The turret deals large amounts of damage to enemies and causes a stumble effect, giving players an opportunity to shoot enemies with their own firearms. While tge turret will not fire at Blinding Spores, it will fire at Archæan Tree Anchor Points and Fuel Cells. It is also capable of detecting and firing at cloaked enemies.

Once the turret has run out of ammo or has been destroyed, players can resupply it with REACT resupply cases. Only one turret can be placed at a time. Players can pick the turret up and place it at a different spot at anytime. 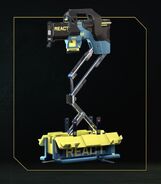