Edit
watch 01:25
'Rainbow Six' Profile: Bandit
Do you like this video?
Play Sound

"I used to be undercover. I did time. I had to deal drugs. I even had to kill. And I was so good at it that, it got me a promotion."
— Bandit

Dominic Brunsmeier and his twin brother Cedrick were born in Berlin, East Germany. Both were raised in a working class district near the Berlin Wall. Their father worked in the police force and strongly encouraged them to join. In 1992, the day after their eighteenth birthday, both brothers joined the Bundesgrenzschutz (BGS). Stationed with border patrol, Brunsmeier spent his first year getting accustomed to taking orders and filing paperwork. Brunsmeier excelled in crisis situations. He transferred to the Aviation Group long enough to obtain his helicopter license but his adaptability and experience with border surveillance flagged him for undercover operations.

In 1994, he was assigned to a joint task force aimed at quelling the growing threat of the Red Army Faction (RAF). In 2006 he was recruited by the GSG-9 to go undercover, where he would spend four years embedded with the Hannover Chapter of the Hells Angels. In both operations Brunsmeier's contribution was critical in seeing key members arrested and providing valuable information. While undercover, Brunsmeier honed skills in guerrilla tactics and improvised explosive devices. He developed prototypes of his electrified barricade and deployable shield.[1]

A prankster, Brunsmeier honors and humiliates his brother's memory each time he deploys the Crude Electrical Device (CED), the weapon responsible for Cedrick's early retirement from the BGS. Resourceful and adaptive, Brunsmeier relies on his cunning for survival.[2]

I wouldn't expect an operator who worked undercover for years amongst dangerous biker gangs and militants to be anything less than clever and adaptive. And in re-reading Specialist Dominic "Bandit" Brunsmeier's file I'm struck by just how resourceful he had to be. It's clear he had to be creative and strategic to stay alive. Frankly then, I was surprised by his sense of humor. It must've sustained him through his undercover operations. That said, he can have a cold intensity. Nothing reminds me that I'm a soft civilian more than looking into Brunsmeier's eyes. […]

Brunsmeier certainly speaks fondly of his brother. He enjoys being an uncle to his brother's kids - how they're the only ones who let him be as silly as he'd like. He told me about their childhood in the shadow of the Berlin Wall. How sometimes they'd hear a BOOM from something triggering a land mine. And how they couldn't resist pranking the patrol guards with some twin antics. […]

I didn't want to ask about the undercover work directly. It wasn't until our most recent meeting when he volunteered some information. Brunsmeier described the challenge of remember the real "you" when immersed in another persona. The question: "Who are you?" would creep into his sleep. If he dared to form an answer, he knew he was as good as dead. Even considering the question was dangerous. So he would push it away. We discussed details of what he had to do to ensure his cover wasn't blown, the source of some fantastic rumors circulating about him. Smiling, he assured me they're only half true. I don't want to break his confidence here. I merely need to assess if it has any lasting impact on him and the Rainbow team. […] The most I can offer at this time is that the team works well together. […]

It's critical that Brunsmeier doesn't close himself off. Training scenarios alongside operators such as Specialists Miles "Castle" Campbell, Emmanuelle "Twitch" Pichon, or Elias "Blitz" Kotz could help. These operators have calming attributes that may temper Brunsmeier's inner demons.

A Light Armored Operator, Bandit's unique gadgets are four Crude Electrical Devices, a.k.a. Shock Wires. These devices send an electric charge through metallic gadgets and will damage those who come in contact.

The CED-1 is the result of Brunsmeier's resourceful nature. The device was first created when he was cornered in an abandoned auto shop outside of Frankfurt. Using what was available to him, Brunsmeier fashioned a crude electrical device and was able to secure his defenses by electrifying a metallic door and shocking his assailants as they attempted to breach his stronghold. The device, though relatively low-tech, has followed Brunsmeier from GSG 9 to Team Rainbow, due to its consistent and effective performance in the field. 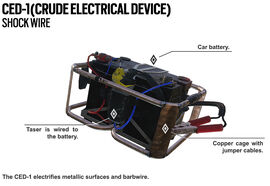 Given that the CED-1 Crude Electrical Device "Shock Wire" is a fairly straightforward tool in Specialist Dominic Brunsmeier's arsenal, he was surprised when I told him it was scheduled for evaluation. Bandit's more of a grease monkey and so he seemed out of place at first in the test facility. (Note: Need more lab coats in size Large. I'm not letting him wear mine again. I don't know what the hell he spilled on it, but I recommend it be incinerated).

So far we've collected a solid amount of data. The fun part was running a series of mods to maximize its capabilities and naturally Bandit has his own methodology and tricks up his sleeve. In my opinion, if we want any future modifications the best bang for our buck is to explore battery configuration. Bandit is in the "if it ain't broke" camp, so it's going to take some convincing. Let's tag it as "in progress."

Harry: How are your nightmares progressing?

Dominic: I don’t have nightmares. I never did. My dreams are more like overactive situational awareness.

Harry: Can you elaborate?

Dominic: In my dreams, I can remember every detail of every room, who was there and what they talked about. Always, I know I have to maintain control of the situation or risk… erasure.

Dominic: Then I recommend yoga, Doctor. I’ve been told that it helps.

Bandit deploying his Shock Wire on a reinforced wall

Bandit giving himself a scar (undercover)

Bandit at a meeting (undercover)

Bandit working on his motorcycle (undercover)

Bandit going through a deal (undercover)

Bandit arguing with his girlfriend (undercover) 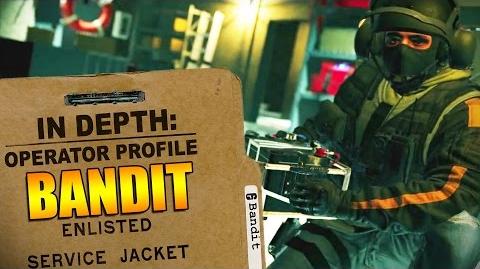