Edit
watch 02:56
Raise a Floppa - The Loop
Do you like this video?
Play Sound
Not to be confused with the Reinforced Wall

Barricades are a piece of equipment featured in several installments of the Tom Clancy's Rainbow Six Franchise. Barricades enable players to block off openings such as doors or windows and fortify defenses for an area.

The Defenders have an unlimited number of barricades able to be placed on windows or doors to prevent the Attackers from having a line of sight. All exterior facing doors and windows are pre-barricaded at the start of a round.

Barricades are made of many horizontal wooden boards connected by yellow fabric on the two sides (which is nailed to the door or window frame), with a large yellow X painted in the center. Door barricades leave a gap at the bottom, which Drones can pass through.

Barricades are very fragile. They can easily be breached with explosives such as Breach Charges, Nitro Cells, and Frag Grenades. Three melee hits are guaranteed to destroy a barricade, regardless of where it is hit (inside of the fabric), and additional damage can reduce the number of hits needed. Players may also vault or rappel through them if a large enough piece of the barricade is destroyed, destroying it in the process. Each of the boards can be broken off individually, but will eventually break if enough damage is sustained.

Shotguns can create large holes within barricades up close, destroying them entirely in only a couple shots. Assault Rifles, Submachine Guns, and Sidearms only create small holes, requiring 20 shots to destroy.

Defenders can take down barricades by holding the interaction key on them, showing the defenders pulling out a crowbar and prying the entire barricade off. Regardless of the destruction method, destroying a barricade creates a distinct noise as the wood boards crumble off. The yellow fabric nailed to the door or window frame will remain.

This section features a Codex Entry. 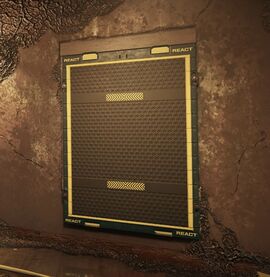 Barricades are available for all Operator's in Tom Clancy's Rainbow Six Extraction. Barricades resemble Castle's Armor Panels with a REACT color scheme. They function in a similar manner as their counterpart in Siege. Barricades may be placed on windows or doorways that have destroyed Containment Doors.

Barricades are used to fortify areas or slow the movement of alerted Archaeans and are particularly useful in defensive objectives such as Serial Scan or Sabotage. Players remain vulnerable to damage during the deployment animation. Players can remove barricades by holding the interaction key on them.

Barricades are more resiliant to damage than their Siege counterparts. Barricades can hold off most lower tier enemies such as Grunts or Breachers for a considerable amount of time. One viable tactic is to create a small hole in a barricade to enable players to fend off enemies while they are focused on attacking the barricade. Higher tier enemies can destroy barricades in a few hits through melee strikes, projectiles, or exolosives.

Barricades are also susceptible to damage from Operator weapons, gadgets, explosives, and melee hits. Shotguns can create large holes within barricades up close, destroying them entirely in only a couple shots while other weapons will create small holes.