Bastian Vanderwall is the main antagonist of Tom Clancy's Rainbow Six: Lockdown. He is the leader of the Global Liberation Front. He was directly responsible for the terrorist attack in Pretoria, South Africa where the nanotech aerosol virus Legion was stolen.

Vanderwaal observing the effects of the Legion virus.

Vanderwaal at the time of his death. 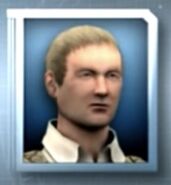 Character model
Add a photo to this gallery
Retrieved from "https://rainbowsix.fandom.com/wiki/Bastian_Vanderwaal?oldid=61168"
Community content is available under CC-BY-SA unless otherwise noted.