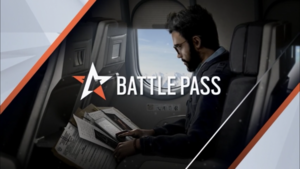 The Battle Pass is a microtransaction system featured in Tom Clancy's Rainbow Six Siege. The pass rewards players with cosmetics through tier progression. Each Battle Pass features additional information and lore about Rainbow Operators. A test pass, dubbed the "Mini Battle Pass" was released in the Operation Ember Rise expansion. Following the Operation Shifting Tides expansion, all expansions have featured their own Battle Pass.

Progression on a track is obtained through "Battle Points" which are awarded based on performance in completed matches. Battle Points are awarded for completing rounds in multiplayer. Points are not obtained for leaving matches, getting kicked, staying idle, and surrendering.

"You've seen me before. Perhaps in the shadows, observing, watching, recording my thoughts. While Six would take the center stage, I was never far behind, whispering my advice as I calculated and planned Rainbow's every step. Now, as I assume the mantle of Six, I can finally set in motion the strategies I have carefully engineered. I know it will take years to unfold, but no matter, I am playing the long game. I will change Rainbow. Forever. Also, please, just call me Harry."
— Harry Pandey

The Mini Battle Pass, also known as Call Me Harry was released on October 15, 2019 and concluded on October 23, 2019. Serving as a test to the main battle pass, it only had seven tiers. It was available for free to all players. 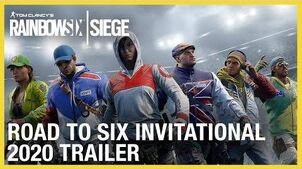 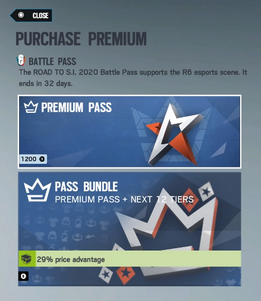 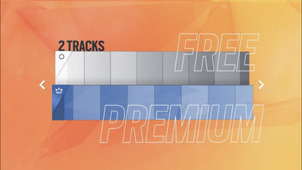 Around The World[edit | edit source]

The second Battle Pass, "Around The World", was released during the Operation Void Edge expansion on March 25, 2020 and concluded on April 22, 2020.

The fourth Battle Pass, "Class of Zero", was released during the Operation Shadow Legacy expansion on September 10, 2020 and concluded on October 19, 2020.

Retrieved from "https://rainbowsix.fandom.com/wiki/Battle_Pass?oldid=80288"
Community content is available under CC-BY-SA unless otherwise noted.