Edit
watch 01:19
'Rainbow Six' Profile: Blackbeard
Do you like this video?
Play Sound

"I'm a diver. We're used to seeing threats through a layer of tempered glass."
— Blackbeard

Craig "Blackbeard" Jenson is an Attacking Operator featured in Tom Clancy's Rainbow Six Siege. He was introduced in the Operation Dust Line expansion alongside Valkyrie.[1]

Jenson grew up in a comfortable upper middle-class family with no military history. He decided that he wanted to be a Navy SEAL at a young age. He sought to break the family tradition of being involved in medical sciences and devoted his life to achieving his goal. With the help of his father, a kinesiology professor at the University of Washington, he joined the Boy Scouts of America and the United Sates Naval Sea Cadet Corps (Blue Angels Squadron) at the age of twelve.

This solidified his desire to serve his country and see the world. Jenson enlisted in the United States Navy at eighteen. Joining the military offered him the ideal opportunity to pursue an academic education while learning a wide range of skills that fueled his adventurous spirit. After his initial military stint, Jenson eventually succeeded in his ultimate goal of joining the US Navy SEALs. At some point he worked as a SEAL instructor, meeting Meghan Castellano during her training. Jenson later married and had kids. In 2016, he was recruited into Rainbow.[2]

The drive and discipline seen in SEAL team members is what drew Jenson to the group. He sees SEALs as an ideal blend of mental and physical abilities and strives to optimize both of these traits in himself. Driven to succeed in his profession and his private life, he climbed Mount Everest, participated in US sailing championships, and has sailed around the world on several occasions.[3]

Specialist Craig "Blackbeard" Jenson has a commanding presence, complemented by a boisterous sense of humor and a booming laugh. Outside his operational role, Jenson doesn't appear to take too many things seriously. He was relaxed and open throughout our conversation, describing himself as "gung-ho and an all-in kind of guy." I have to admit I don't hear "gung-ho" too often. […]

Athletic, rugged, a mountain climber and competitive sailor, Jenson tells me that he's most himself when he's in nature. He says the wilderness encourages adaptation and builds willpower, tolerance, and acceptance. This seems to be something he's been cultivating since his youth. I asked him if there was a job out there that he would do if he wasn't in the military. He told me that he thought about becoming an oceanographer but right now there's "still a lot of shine on being a SEAL". […]

I asked him when he first discovered his taste for adventure. At five years old he snuck out of bed and hauled all the family camping equipment into the woods behind his house. He camped there for two days, then returned so his parents wouldn't worry. He later learned that they knew exactly where he was and had been keeping an eye on him. He regrets not staying out longer. […] He says his great-grandfather quit his job one day, left his wife and kids, and went North to be a gold miner. Jenson says he shares that same passion to explore, though he's not at all interested in abandoning his own wife and children. […]

Present day pirates are a serious concern to the Navy, and Jenson has participated in multiple anti-piracy task forces. That said, when at home he enjoys playing swashbuckler pirates with his kids. Jenson says pirates were egalitarian, and that it was similar to how a Rainbow team might conduct an operation. […] He's a solid operator with a clear image of his role. He's successful at it and well-liked by his team. If he wants to play pirates in his downtown, I think it sounds like fun.

A Medium Health Operator, Blackbeard's unique gadgets are his two Transparent Armored Rifle-Shields (TARS). They protect his head from a couple bullets, allowing a slightly higher survivability rate at the cost of mobility and recoil control.

"Deploys a ballistic shield on his rifle that can be swapped if the first one gets damaged."
— TARS Mk 0-Transparent Armored Rifle-Shield Description

The TARS Mk 0, Transparent Armored Rifle-Shield, or simply "Rifle-Shield", is a prototype based on the armor shield technology for tank gunners. It allows Blackbeard to increase his mobile protection without diminishing his field of vision.[1]


The last time my TARS Mk 0-Transparent Armored Rifle Shield went through a series of modifications, Mira took the lead. This time though, she's swamped and lab time is tight so she's asked me to run the tests.

Pulse, Blitz (Specialist Estrada and Kotz) and I had a hoot testing the shield on the tactical training range. With only a half-day we came up with an action list to be addressed (attached). Past modifications to the ballistic shield's composite materials are in the attached specs (I stopped reading at "aluminum oxynitride" and actively felt my spirit leave my body when the phrase "auxetic in certain orientations" caught my eye).

Overall, as long as it continues to be reliable I'm a happy guy!

(Comment_E. Alvarez: Thanks, Craig. One note: You three shouldn't tease the techs so much. They didn't know you were joking with those stunts. Mira.)

Blackbeard armed with his Mk17 CQB

Blackbeard armed with his SR-25

Blackbeard in the Guerrilla Elite Skin 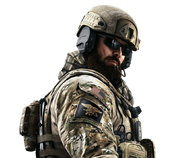 R4-C with Level III Striker Shield attached to it

Blackbeard and Valkyrie in the Operation Dust Line promotional art

Blackbeard in the 4th of July Bundle

Blackbeard in the 8-Legged Bundle

Blackbeard in the Dignified Bundle 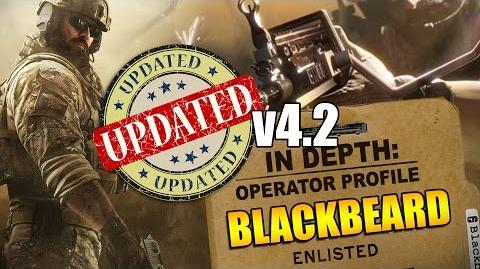