Boyd Brooks is a local of Truth or Consequences, New Mexico. One night, he noticed what appeared to be a meteorite fall nearby and went to investigate the crash site. Finding a Soyuz Capsule instead, Boyd loaded it onto his truck and brought it back to his garage in his salvage yard. He then posted a listing of the capsule online in hopes of selling it. Unfortunately, when he opened it to see what was inside, an Apex emerged, infecting Boyd with the Chimera Parasite. With the outbreak underway three days after finding the capsule, Boyd made his way to the Sierra County Hospital. As he entered the building to ask for help, he was shown to have red spikes growing out of his body. He was then recognized by Dr. Ellen Mackintosh but before she and her staff could help him, his eyes turned red. He then succumbed to the infection and started attacking everyone nearby. Boyd was later killed but his body was taken by Dr. Mackintosh who collected blood samples from it over the course of seven days in hopes of creating a cure.

While Dr. Mackintosh was unable to develop a cure, REACT managed to put a containment up around the hospital. Boyd's body was placed in the biohazard lab of the hospital for further study. A few years later, the Chimera Parasite reemerged from underground, retaking Truth or Consequences. Large carapace tendrils sprang up around Boyd's body and enveloped it, raising it in the air and absorbing what was left of his remains.

The Capsule inside Boyd's garage.

Brook's body as seen in the Biohazard Lab 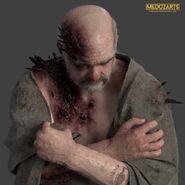 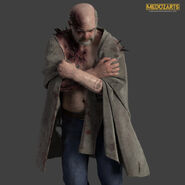 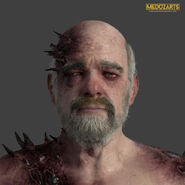 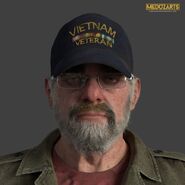 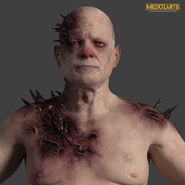