A breach charge is an explosive device used by military, police, or emergency services to force open closed and/or locked doors. A wide range of breaching methods may be used in any given situation, but explosive breaching can be the fastest method, though it is also the most dangerous, to both the breachers and the room occupants. Depending on the situation, explosive breaching is potentially slower than a ballistic breach due to the large standoff required when using explosives, if there is no cover available. Breaching can be performed with a specially formed breaching charge placed in contact with the door, or with various standoff breaching devices.

Explosive breaching charges can range from highly focused methods, such as detcord, plastic explosives, or strip shaped charges that explosively cut through doors or latches, to large satchel charges that can breach even reinforced concrete bunkers.

The breach charge is considered a gadget in the Rainbow Six universe.

The Door Charge is a gadget featured in Tom Clancy's Rainbow Six.

Breaching charges are used to explosively remove doors for rapid entry. Flashbangs do not need to be used in conjunction with a breaching charge as they stun, wound, or even kill anyone nearby. 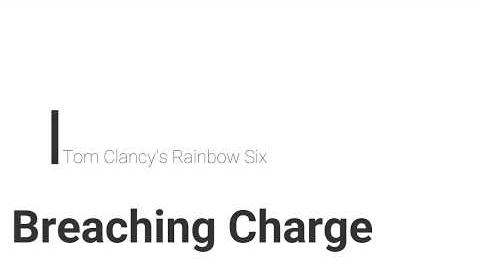 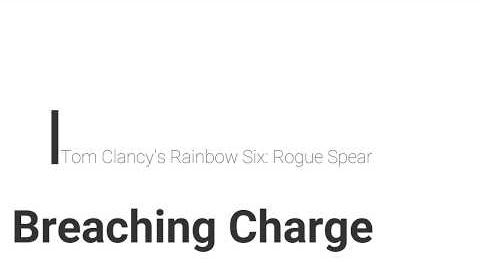 "An explosive charge, placed on doors, and detonated by a hand held trigger. It completely demolishes the door and kills or seriously injures anyone on the other side. The Breaching Charge is perfect for fused doors."
— In-game description

The Breach Charge is an equipment featured in Tom Clancy's Rainbow Six: Lockdown.

In the PC version of the game, the Breach Charge is part of the standard gadget set of Louis Loiselle, Jamal Murad and Roger McAllen.

"An explosive that breaks doors open and wounds nearby enemies."
— In-game description

The Breach Charge is a remotely detonated explosive device that can breach non-reinforced walls, windows, and floors with ease. This is often used to create entrances to rooms held by the Defenders and can create new sight lines as well as lines of fire. The majority of the Attackers have the option to either utilize the breach charge or carry an alternate breaching tool.

The Hard Breach Charge is a gadget introduced in the Operation Shadow Legacy expansion. It is available for several Attacking Operators and allows for the breach of reinforced walls and hatches.