Sergeant Brian Armstrong is an American Rainbow operative that appears in PSP version of Tom Clancy's Rainbow Six: Vegas. He was part of a two man advance team sent in by Rainbow at the start of the siege.

In 2010, Armstrong and Shawn Rivers were recalled from leave and tasked with recovering fellow Rainbow operatives Gabriel Nowak and Kan Akahashi following their kidnapping at the Mexican Border. After being briefed by Joanna Torres, the pair traveled via helicopter to a villa owned by Irena Morales outside of Las Vegas where they believed Nowak and Akahashi are being held. After engaging with multiple terrorists throughout the compound, they found no sign of their fellow operatives. Despite this, Armstrong recovered a hostage and later hacked the communications apparatus. He learns that the terrorists may have taken them to a private airport that is also owned by Morales. Armstrong and Rivers then escorted the hostage to the villa garden where they successfully held off the remaining terrorists until they were extracted via helicopter.

Armstrong and Rivers traveled to a private airport owned by Morales. With information from the hostage, they made their way toward a hanger owned by an associate of Morales named Lucas Picares, engaging terrorists in several firefights along the way. At the hanger, they discovered a biochemical lab, deducing that Picares was producing chemical weapons. They then received word from Torres that Picares has arranged for a plane to fly out of the airport. They arrived at the control tower and engaged with several terrorists. As Armstong entered the tower to access the navigation computer, however, Rivers warned him of an incoming RPG. Armstrong managed to survive the explosion and accesses the computer. He patched into a radio transmission between Picares and an unknown man and confirms that Picares was attempting to escape the airport. Armstrong and Rivers returned to the hangar and dispatched the remaining terrorists. Rivers cornered the man he believed to be Picares and attempted to arrest him. The man refused to comply with Rivers' orders and instead injected himself with a sample of Picares' bio-weapon, killing himself. Before he died, the man had stated that the same fate would soon befall all of the people of Las Vegas. Rainbow later learned the man who died was not Picares but a man named William Morrison.

With no other leads, they departed the airport and traveled to an office building in Las Vegas leased by Morrison. Not long after entering, they found the same biohazard chemicals that were found in Picares' hangar. With the threat of a biochemical weapon now apparent, Six had Torres order Armstrong and Rivers to give up their search of Nowak and Akahashi in favor of stopping Picares. Torres reassured Armstrong and Rivers that other Rainbow teams would continue to search for Nowak and Akahashi. Both operatives then made their way to an old casino vault in the building and found a network access point. They learned that Morrison's company had also rented out the building's penthouse and that it holds a computer with encrypted data. Armstrong took the elevator to the penthouse and dispatched the remaining terrorists while Rivers provided sniper support from the helicopter. Armstrong managed to recover the computer hard drive and rescued a civilian being held hostage. Unfortunately, Morrison had rigged the penthouse to explode should the hard drive be taken, prompting Armstrong and the hostage to race back to the elevator. Despite the subsequent explosion, Armstrong and the hostage escaped unharmed.

Armstrong and Rivers later deployed to a water filtration plant in Las Vegas in an attempt to stop Picares from unleashing his biological weapon into the city's water supply. As they made their way through a construction site to the facility's main building, Torres notified them that Nowak and Akahashi had been found. They arrived at the main building and attempted to shut off the power to the water pumps before the contaminated water could be distributed. As Armstrong was about to cut the power, however, he was called by Torres who informed him that Picares had a backup plan. Should the power be cut, the plant was rigged explode, crippling the city's water supply. Torres decided that this woukd be their fallback plan. Rivers was then tasked with shutting down the pumps manually and disarming the bombs while Armstrong was placed on standby at the main breaker. Rivers managed to reach the pump control panel but learned that the pump overrides had been sabotaged. He was then ambushed by Picares who shot Rivers before escaping. Rivers was injured but survived the shooting. He then told Armstrong that the only way to stop the contaminated water now was to cut the power. Armstong was hesitant to do so until Rivers escaped the building to safety. A few moments later, Rivers radioed Armstrong that he made it out safely, prompting Armstrong to cut the power. As expected, the the facility exploded though contact was lost with Rivers.

Picares fled to the Nevada Dam and was unknowingly followed by Armstrong. After engaging with several terrorists, Armstrong met a security guard who gave him access to the dam's lower levels. The guard also told him that to gain access to the dam's penestock pipe vault, he would locate a keycard. While searching for the keycard, Torres informed Armstrong that they found Rivers. It is revealed that Rivers did not make it out of the water plant in time and died from a combination of his injuries and the explosion. Torres and Armstrong surmised that Rivers knew that he did not have enough time and sacrificed himself by telling Armstrong he was safe in order to prevent the release of the bio-weapon into the water supply.

Determined to find out what Picares was planning, Armstrong proceeded deeper into the vault. A short time later, Torres informed him that releasing the bio-weapon into Las Vegas' water supply was only Picares' secondary objective. She told Armstrong that Picares' primary objective was connected to the dam though they were unable to properly intercept enemy transmissions. Not long after, however, Armstrong discoverd a planted nuclear device, revealing Picares' true plan to detonate the device, destroying the dam but also heavily contaminating the water supply of Las Vegas and the surrounding cities. Torres informed Armstrong that the device matched the description of one that had been stolen the year before and told him that he must recover the device's input controller laptop in order to stop it.

On the helicopter ride out of the dam, Armstrong expressed his sorrow for Rivers' death, acknowledging that Rivers had said that this was going to be a "bad mission". Torres consoled Armsrong, reminding him that they saved the lives of thousands of innocent people and that if Rivers was here he would tell them that he wrong about his initial assumption about the mission. The two then flew back to Las Vegas to be debriefed.

Brian analyses tactical situations and plans his teams approaches to their objectives. He is usually the first man through the door. A smart, skilled and loyal soldier, Brian sees nothing wrong with occasionally expressing the intensity of his emotions when situations call for letting off some steam. 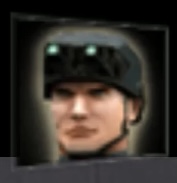