Edit
watch 02:56
Raise a Floppa - The Loop
Do you like this video?
Play Sound
For the overall gameplay system, see Destruction 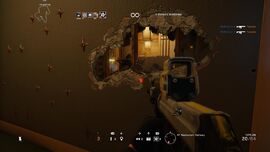 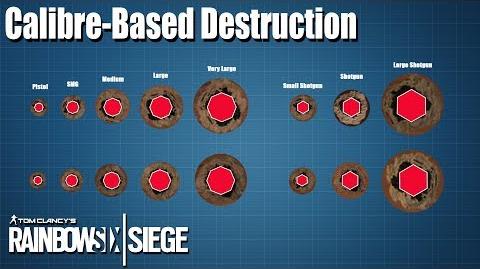 Aside from metal or concrete objects, all objects on maps can receive bullet penetration, to include walls and furniture. This creates an ever-changing environment on the map by allowing players to fire through cover and damage enemy players.

Gunshots create little bullet holes on destructible surfaces and can break entire chunks of the destructible surface if enough shots landed within a certain area, known as an impulse. Weapon types and bullet caliber determine the size of bullet holes in objects. A weapon with a higher caliber like the D-50 can create holes faster. Shotguns will completely destroy destructible objects, creating large holes in walls or furniture. Reinforcements may be applied to walls or hatches in order to prevent bullet penetration or breaching.

Limb Penetration has been a feature of Tom Clancy's Rainbow Six Siege since launch. The release of the Operation Shifting Tides expansion reworked the system to reflect the implantation of new Operators to the game.[1]

There are three types of limb penetration in the game: none, simple, and full. 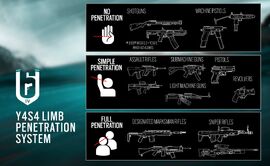 With the new system, most bullets will go through arms and hands. The damage received if a shot hits only those areas (without penetration) is reduced to 75%, the same as leg shots. For Operators with 3 Health, however, damage is reduced to 65%.