watch 01:37
'Rainbow Six' Profile: Capitão
Do you like this video?

as of Operation Phantom Sight
240

"I get it. Everyone’s just doing their best to survive. You shoot at me, though? Then it gets personal."
— Capitão

Vincente Souza was born the youngest of three children, and grew up in Nova Iguaçu outside of Rio de Janeiro. At the age of ten, Souza's older brother was murdered by drug dealers of the Comando Vermelho. This prompted Souza to dedicate his life to protect Brazil and join the Policia Civil after high school. He was trained in a wide range of tactical weapons and breaching strategies and was quickly recruited by Cooredenadoria de Recursos Especiais (CORE).

During a raid on the Terceiro Comando Puro, Souza was ambushed as he cleared a house in Senador Camará. Sourza and three others were held captive and tortured for two months, resulting in the loss of his left eye. Despite this, his inner resolve kept him alive until CORE rescued them.

There were talks of removing him from the field. In the meantime, CORE was looking for field operatives to test new gear, and Souza saw his chance. His stoicism and unique tactical method then turned him into a local icon. BOPE believed that Souza perfectly embodied their motto, "Victory Over Death", and recruited him into their ranks. Souza did not hesitate to accept as it meant he would be working in the favela where his gear would lessen casualties. He went on to become a renowned expert in the organization and a psychological barrier of criminal gangs. His fight to end drug crime also led the cartel to place a bounty on his head.

At some point, Souza had three children of his own, naming his eldest son after his deceased brother. In 2016, he accepted an offer to join Rainbow alongside Taina Pereira.

The loss of his brother made him dedicate his life to protecting Brazil. He can become fixated when innocent lives are at stake. This makes him an excellent operative in conditions where there is a high risk of collateral damage. His experience as a hostage has only strengthened his resolve to protect Brazil from the horrors the drug trade inflicts upon its people.[2]

Vincente: I’ve met people like you before. I got sent to a shrink after I lost my eye. You know what he wanted me to do? Visualization exercises. He wanted me to pretend that I still had both my eyes, to imagine the life I had before and “project it into the future.” You know what I said to him? “Cara, imagining I’ve still got both eyes isn’t going to get me back on the field. Can you help me or not?” He sent me to an occupational therapist and I never saw him again. So don’t ask me about how I’ve “adapted” or “grown”, or dig into my past to uncover the “real” impact of my trauma. I’m sick to death of talking about the first and only thing people notice about me.

Harry: Then let’s talk about something else.[3]

For all of the descriptions of what makes Specialist Vicente "Capitão" Souza an excellent operator – dedicated, focused, analytical – at his heart he is a family man. Every step of every decision reinforces his commitment to protecting his family and making their world safer.

Raised in a close-knit community, he extends that tradition to his own three children. It's hardly surprising he never got over the trauma of losing his older brother. He named his eldest son in honor of him, and they often share stories to keep his memory alive. Souza's favorite moments are when his house is crowded with family, and the quiet, safe surroundings he's created in his own home give him a chance to relax his guard, knowing that they're all within his reach and protected.

He admitted that he doesn't trust his children's friends, yet he also worries that he can be too overbearing. It sounds like he raised them to be smart about how they live their lives, though I suspect the fear of losing them will always be more intense for him than for other parents with less tragic pasts.

Since there was talk of removing him from the field following his capture and mutilation, I thought it best we discuss how he feels about that ordeal, long ago though it may now be. It wasn't something I wanted to bring up during our first meeting, so I reserved it for subsequent discussions. What's clear is that it shaped him. Souza is dedicated to justice and protecting those who cannot protect themselves. It's made him relentless. At any given moment he is deciphering every aspect of how these gangs function in order to find a weakness. It's a daunting task that one member of law enforcement can't fix alone.

His incomparable resolve and years of unique experiences make him a valuable asset for any team, but it's crucial that he maintains some distance between his role as a protector and his sense of self. We need to be understanding, but we also need to ensure that he remains grounded.

A Light Armored Operator, Capitão's unique gadget is a Tactical Crossbow that can fire Asphyxiating Bolts, which will burn oxygen within a certain radius, as well as Micro Smoke grenades, that can mask positions and team movements.

Equipped with the Tactical Crossbow TAC Mk0, Capitão fires a glass bolt to deliver a swift and silent assault against hostiles without alerting them to your position. The glass cartridge breaks on impact releasing a gas that ignites the oxygen in the surrounding area. It fires two types of ammunition: asphyxiating bolts and micro smoke grenades. The asphyxiating bolts burn the oxygen in a given perimeter, which is lethal to your target. The micro smoke grenades enable you to mask your movements. Deliver swift and agile assaults without alerting your opponents of your position.[1]


Specialist Vicente "Capitão" Souza wasn't available to review his Tactical Crossbow TAC Mk0, though he sends his regards. Both Specialist Trace and myself happened to be on hand anyway so we agreed to help out. I was curious to study the asphyxiating compound in the chem lab and Jordan was interested in the crossbow's firing mechanism. Jordan found the trajectory accurate with a reasonable falloff distance. But my chemical results aren't as in-depth as l'd like.

The micro smoke grenades themselves are pretty straight forward, as far as miniaturization of our existing kit goes. After the results and consultation with Capitão, the three of us came up with ideas for future prototypes (files attached). Finally, I'd like to add my name to the list for any future R&D projects.

Capitão model (Colour)
Add a photo to this gallery

Capitao armed with the PARA-308

Capitao armed with the M249
Add a photo to this gallery 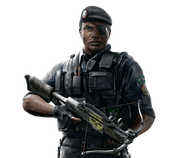 Capitão in the Capitão Bundle with Skull Rain signature headgear

Capitão and Caveira in the Skull Rain Headgear Bundle

Caveira and Capitão in the Brazil Bundle

Capitão in the Cap'n Capitão Bundle

Capitão in the Reptilian Bundle

Capitão in the Loreto Set

Capitão in the Detainee Set 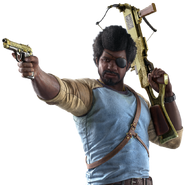 Responsa Elite Skin (transparent)
Add a photo to this gallery 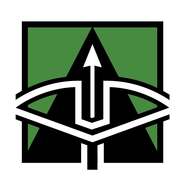 Capitão's Icon
Add a photo to this gallery

Retrieved from "https://rainbowsix.fandom.com/wiki/Capitão?oldid=80760"
Community content is available under CC-BY-SA unless otherwise noted.