Edit
watch 02:58
No Man's Sky Update - The Loop
Do you like this video?
Play Sound
For similarly named pages, see Capitão (Disambig).

"I could say I'm relentless and deadly or I could let my actions speak instead."
— Capitão

Vicente "Capitão" Souza is a REACT Operator featured in Tom Clancy's Rainbow Six Extraction. He is unlocked at Development Milestone 17.

Well-respected and dedicated, Capitão’s leadership qualities and calm demeanor are an asset to REACT as humanity faces the unknown. His extensive record in law enforcement and his mastery of a wide range of weapons make him a versatile and experienced Operator. Just a few adjustments to his TAC Mk0 bolts and Capitão is all set for incursions.

Assessing skills: Souza is a specialist in urban warfare and target extraction and is at his best when there are lives on the line. The Chimera threat will only make him more determined. (INSERT: E. Cohen - And dangerous.)

Speculating on operational experience: The respect the other Operators have for Souza runs both ways, This creates a sense of calm and confidence within the team. (INSERT: J. Porter - "If Cap trusts in what I'm doing, then I'm doing something right.")

A Light Armored Operator, Capitão's unique gadget is a Tactical Crossbow that can silently shoot Venom Bolts, which will detonate a toxic cloud to damage enemies within its cloud of effect, as well as Micro Smoke grenades, that can mask positions and team movements, as well as enable takedowns on tough Archaeans. 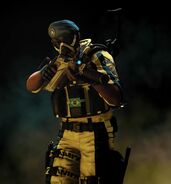