Edit
watch 02:56
Raise a Floppa - The Loop
Do you like this video?
Play Sound
For similarly named pages, see Castle (Disambig)

"Listen up, people: No one dies today. Any questions'll just have to wait."
— Castle

Miles Campbell was born in Sherman Oaks, California. Campbell graduated from California State University with a bachelor's degree in Science and Criminal Justice and promptly joined the LAPD. After five years on the job, he was reassigned to the LAPD SWAT team.

Campbell excelled in tactical support and high-risk incidents. His careful application of dynamic and deliberate entries made him a Captain early on, while his exceptional perimeter control earned him his first commendation.

Always interested in the safety of his team, Campbell worked tirelessly to perfect defense and reinforcement techniques and equipment. He earned multiple commendations since his first and became a certified firearms specialist. Campbell worked in the LAPD SWAT team for three years before he was transferred to the FBI as a field agent where he trained with the German Federal Police (GSG 9). After two years, he was eventually recruited into the FBI SWAT team. Campbell has participated in cross-departmental training sessions with international law enforcement agencies, including the SAS and GIGN.

Campbell's skills later led to his recruitment into Rainbow in 2015 alongside several other FBI SWAT specialists. In early 2021, he and César "Goyo" Hernández were sent to Los Angeles by Eliza “Ash” Cohen to recruit Santiago "Flores" Lucero into Rainbow. After discussing a bit of Flores' trade, Campbell told him that he did not care what he did after hours. He then asked if Flores had heard of Rainbow and The Program. Flores then realized who had sent them and accepted their offer to join Rainbow. As a test, Campbell, Ash, and Goyo observed Lucero perform one last heist on the home of a crime boss in Los Angeles.

Campbell has a knack for putting people at ease. He always appears comfortable regardless of the context. Campbell constantly strives to make sure that those around him are taken care of and feel safe, and is highly protective of people close to him.[1]

Within minutes of my first meeting with Specialist Campbell it was like being with an old friend. He has an easy-going manner. We joked over American football and our football - side note: look up the origins of the word "soccer." I have 20 quid bet on it.

Reports repeatedly mention that Campbell is referred to as "papa bear" or "the diplomat" among Rainbow operators. He described how he smoothed over a heated discussion between two operators the other night. It's clear that he's the team's social glue. This, and his openness, means that Campbell can be grouped with any member of Rainbow. I'm not surprised that he's the one with whom Specialist Eliza "Ash" Cohen feels the most comfortable.

His sense of fair play is clear in both his personal and professional life. I wondered if it was ever a struggle for him, given what he's seen. Without hesitation he told me: His job is to protect those who can't protect themselves. Beyond the sense of justice that motivates him, he has a desire to transform things for the better.

Our discussion explored his appreciation of his teammates, world cultures, and his love for the abused dogs he's rescued. Campbell's a curious person, someone who enjoys learning for learning's sake: Habitually staying up late to watch any sort of documentary certainly makes him a kindred spirit for me. He draws his positive energy from his parents, who have been married for 42 years and are still madly in love. Along with inheriting their work ethic, it's their playfulness he tries to emulate.

Campbell is a hopeful person. He believes in the potential of people - all people - and wants to be an agent of change. He's so concerned for others that he may overlook his own needs. I suspect this is what sparked his recent blow-up after a training exercise. His frustration with himself is evident. One of his strategies hadn't played out the way he had hoped. Clearly, we need to make sure he gets as much encouragement as he offers to the others.

A Medium Armored Operator, Castle is equipped with four Universal Tactical Panels (Armor Panels). These special barricades can be deployed on any door or window frame.

Working with FBI SWAT, Campbell was in the middle of a hostage extraction when he became cornered in a small outbuilding. The dilapidated structure lacked a door. Utilizing what was available to him, Campbell fashioned a crude blockade with a discarded blanket and a staple gun he found in the shed. This allowed him to limit the line of sight to the building and remain concealed until backup took out the pursuing hostiles. This experience inspired the creation of the UTP1-Universal Tactical Panel, a lightweight barricade that has been successfully utilized in FBI SWAT operations since its implementation in 2013.

Simple and sweet, that's how I like it. When I first joined Rainbow, the techs started showing me all sorts of contraptions, but I wasn't going to be someone's guinea pig. Do you know how many times Bandit complained about getting shocked or Maverick sucked on his fingers because the torch ran too hot? From what I understand, my Universal Panels are unique because they use nucleation which allows the carbon nanotubes to guide polymers into longer chains. This makes for even stronger panels, the kind of toughness that Kevlar can't approach*. And I'm fine with that. All these nanotubes make for a lighter load. Just roll them down, nail them into place, and we're ready to throw down. Better than those heavy-ass deployable shields.

*I had to memorize that part so I could recite it to Specialist Chul Kyung "Vigil" Hwa in Korean. 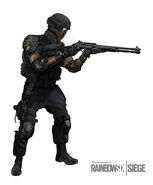 Castle armed with a UMP45 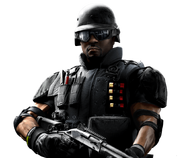 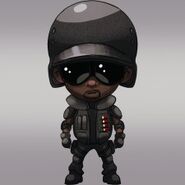 Deployed Armor Panel on a window 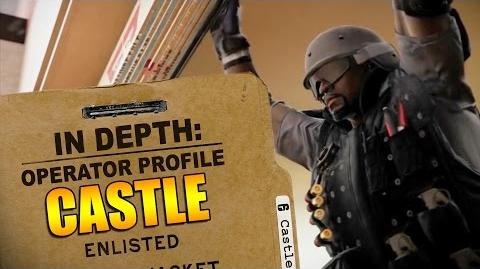