Edit
watch 01:38
Rainbow Six Lore: Caveira
Do you like this video?
Play Sound

"Not every child gets to choose who they grow up to be."
— Caveira

Taina "Caveira" Pereira is a Defending Operator featured in Tom Clancy's Rainbow Six Siege. She was introduced in the Operation Skull Rain expansion alongside Capitão.[1]

Pereira was born seventh in a family of ten boys on October 15th in the small town Rinópolis within São Paulo. Her father had died before she was born, and her mother only received a small pension for his death. She was six years old when the Pereira family was forced to move to a poor neighborhood in Rio de Janeiro.

Stricken by poverty, Pereira and her brothers grew to be strong and independent for the sake of their mother. Their grandmother helped their often exhausted mother with discipline. She had the uncanny ability to see through any of their lies. Pereira looked up to her grandmother and was inspired to learn about the art of interrogation. At some point, Pereira was gifted her first knife by her grandmother.

Pereira caught the authorities' attention when she was 16 after her mother reported that she had gone missing. A year later, Pereira was arrested miles away on robbery charges. Remaining poised and displaying intellect throughout the process, Pereira impressed the judge in charge of her case. He was lenient towards her age and character, which, he claimed, showed potential for social-educational reform. He gave Pereira the choice between entering a juvenile reformatory (FEBEM) and working with the Policia Militar's BOPE as an informant to have her criminal record expunged.

Sensing protection for her deviant predisposition, Pereira accepted the latter. Years of undercover operations within Brazil's notorious gangs made her a master of interrogation techniques and surveillance. Once her mandatory service had ended, she could not see herself in another profession and reenlisted. Pereira was frequently called upon to conduct training exercises within the force. It was Pereira's role as a key interrogator during the 2010 Rio de Janeiro security crisis that caught the attention of Rainbow, despite the fact that she undermined BOPE protocol. Pereira formally accepted an invitation to join Rainbow in 2016.[2]

In 2019, her younger brother, João "Dengoso" Pereira, was sent undercover at the Santa Blanca Drug Cartel and subsequently disappeared. Worried, Pereira went AWOL to Bolivia in order to find her brother. This action led to Emmanuelle "Twitch" Pichon and Meghan "Valkyrie" Castellano to collaborate with Ghost Recon to conduct Operation Archangel in order to recover Pereira. While the mission was a success, it caused tensions to rise between her and Valkyrie.

The continued global threat of terrorism led Harry Pandey to conceive The Program. Following the construction of the Stadium, Harry threw the first annual Six Invitational to serve as the ultimate test for Rainbow Operators. Pereira and her team qualified for the final match. However, she was eliminated by Grace "Dokkaebi" Nam with a shot to the head and her team subsequently lost. Pereira later told Harry in an interview that while she was disappointed by the loss, she would definitely be returning next year to compete.

A year later, Pereira was placed on Team Ash for the next Invitational. Led by Eliza "Ash" Cohen, their team ultimately won the tournament. Unfortunately, they only managed to win due to questionable tactics by Jaimini "Kali" Shah. After the match, Pereira was in the locker room when Ash confronted Kali and a fight broke out between them. Pereira and her fellow operatives subsequently pulled them apart. She stood by Ash's side as everyone argued about who was at fault in the situation.

Towards the end of 2021, Pereira was made Team Captain for the upcoming Invitational. She also started a relationship with a woman named Camila, whom she affectionately calls Amoreco. Pereira later heard of the Garda ERU's new grueling obstacle course and tried it out for herself. After barely completing it, she asked the course's architect, Brianna "Thorn" Skehan, if she wanted a job. Thorn accepted Pereira's offer and was recruited into Rainbow and placed on Pereira's team for the Invitational. A short time later, Pereira and Seamus "Sledge" Cowden were invited by Thorn to train at her family farm in Ireland. While the training was intense, she and Sledge enjoyed their time at the farm and the beauty of its surrounding landscape.

Upon returning to Greece, Pereira accompanied Thorn on a trip to Athens to go sight seeing. While visiting the Parthenon, Thorn noticed two suspicious men exchanging a brief case. Pereira told her to ignore them as they were off duty. Thorn disregarded the comment and ran after the man with the brief case. They both followed the man to a vacant lot and learned he was trying to sell weapons as well as a funeral mask that had been stolen from one of Pereira's favorite museums. Thorn confronted the men who drew their guns on her. Pereira then approached and told them to relax, using her distraction as an opportunity to disarm one of them. While engaging them in hand-to-hand combat, Thorn complained that she had the situation under control. Pereira stated that while she didn't doubt her, she wanted to show Thorn that teamwork was a big part of how Rainbow operates. The last remaining man then fled in a van, prompting both women to commandeer a horse to chase after him. Pereira managed to shoot out one of the van's tires which caused it to crash. They then subdued him and secured the stolen artifact and weapons before being arrested by local police. After they were released from police custody, Pereira and Thorn were reprimanded by Sam "Zero" Fisher for failing to keep a low profile.

After the conclusion of the Six Invitational in early 2022, Kali and Nighthaven cut ties with Rainbow and poached several operatives. This, and the revelation of Nighthaven's connection to criminal organizations, led Harry to reorganize Rainbow into smaller, more specialized teams to increase effectiveness. Pereira was selected as a team leader with her team specializing in covert espionage and was made up of operatives that were the best at infiltration, surveillance, intelligence and elimination.

Pereira excels at extracting information from suspects. Albeit using controversial methods, her skills in confined environment tactics, extraction, and extreme risk situations are exemplary. Multiple reports note that she is considered a dangerous, free-roaming operator. Her brutal behavior on the field suggests she may be suffering from an anti-social personality disorder. However, the results of all the tests conducted were inconclusive. Outside her professional life, she is known to enjoy learning different languages and fighting in unofficial Jiu Jitsu tournaments.[3]

It's too obvious to describe Specialist Taina "Caveira" Pereira as fearless and intelligent when a slew of reports describe how daring she is on operations; how she isn't one to ruminate before she reacts; that she's about getting the job done. And while her successes haven't gone unnoticed, she's been denied commendations due to her rebellious nature. With all that, on our first meeting I was expecting – who was I expecting?

Starting her military career as an informant tells me she's a survivor. In that context, it made more sense to ask why she continued once her mandatory sentence had ended. She told me it went from being a way out to being a way of life. She's still defiant, up against the system. But it's also clear, even as she teases others about their "superhero sense of justice," that she takes her role seriously.

Pereira is often criticized for being blunt by those who don't understand large family dynamics – particularly with so many brothers. Though very close with her siblings, Pereira had to fight to be heard or even noticed. It's understandable that she treasures privacy, and exudes great satisfaction with having her own way. At the same time, her family dynamics made her comfortable with noise and spontaneity, and she understands the subtleties of group dynamics far better than others her age. It's one of the reasons she's so skilled with interrogation. I do hate to imagine how the streets may have sharpened that skill, though.

Pereira has made it clear we won't be discussing her private life. By the way she played with her necklace, I think she was protecting someone close rather than slighting me.

So, who was I expecting when I met Specialist Pereira? She isn't someone who can be anticipated or predicted. That's not an ominous warning. Quite the opposite. I have utmost faith in her abilities, in her poise and inner focus. Where others see rebellion, I see resourcefulness. Pereira is full of surprises, but it's my opinion we can trust her to do the right thing.

A Light Armored Operator, Caveira possesses the "Silent Step" skill, which enables her to sneak up on enemies to immobilize them. Once they are down for the count, she can "Interrogate" them to reveal their teammates' locations.

Caveira's "ability" is made up of three parts: her Silent Step, her special handgun, the "Luison", and her ability to "Interrogate" downed enemies.

Silent Step, as its name indicates, allows Caveira to move quietly, making it nearly impossible to detect her movements by sound.

The ability Interrogation allows Caveira to interact with downed attackers and receive the live location of the enemy's allies.

"Caveira's predatory stealth, the "Silent Step", allows her to lurk on her prey, almost inaudible, until it's too late."
— Silent Step Description

Caveira’s predatory stealth technique, the "Silent Step", allows her to lurk on her prey, almost inaudible until it’s too late. Caveira’s ability allows her to sneak on her target, swiftly immobilize them and force them to divulge the position of the opposing team (the interrogation mode). She is also equipped with the "Luison", a unique PRB92 with a custom suppressor and subsonic ammunition. Do not simply neutralize your opponent; make sure that no one gets away.[1]


Of all the operators I've met so far, none impress me so much as Specialist Taina "Caveira" Pereira. I've spent my life learning how to move and stalk animals, but even I can't hear Caveira when she's on the prowl. Her tricks are simple, straight forward. She plots her path instantly, her stride heel to toe and low to the ground. Her combat boots are specially made and fitted in a way that lets her shift her weight around. All that together would make for a quiet operator, but what makes her silent is talent and survival. Few hunters experience fear and danger the way she has, and I suspect it's what allows her to be so quick and so quiet.

You wanted me to learn from her? Fine, do you have a lifetime to spare? 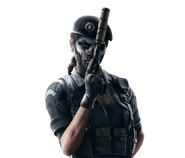 Caveira during The Program

Caveira without Makeup (The Program)

Caveira and her Grandmother (concept art) 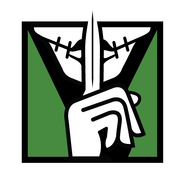