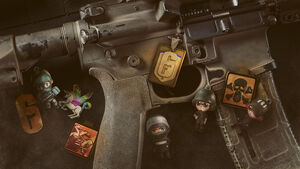 Charms come in five rarities: Common, Uncommon, Rare, Epic, and Legendary. Active charms can be purchased from the in-game store for a limited time and are rotated out frequently. All other charms can only be obtained through special deals in the in-game store or through Alpha Packs. Special charms are also available through Ranked seasons, the Ubisoft Club, challenges, or promotions for Twitch Streamers and eSport events.

Exclusive charms are available to players who complete certain challenges during their active timeframes. The challenges are mainly gamepay focused, primarily on accomplishing tasks with feats such as winning games or getting kills.

Battle Pass charms are available to players who achieve specific tiers on the free or paid tracks of an event's battle pass.

Twitch Prime charms are available to players who redeem Twitch Prime rewards with their Ubisoft account linked during designated time periods with an account activated for Twitch Prime. Charms were once distributed via Twitch Prime Collection Packs, but are now directly awarded to the linked Ubisoft account. More information can be found here. All dates and times displayed are in UTC.

Twitch drop charms are available to players who watch participating Twitch streamers with a linked Twitch account to their Ubisoft account during designated events such as championships and other eSports events. Charms are distributed through a percentage chance based on the length of time the stream is watched or directly through an accumulation of hours, depending on the event itself. Charms become available after the designated drop window has ended. More information can be found here. All dates and times displayed are in UTC.

Elite Charms are only available through the purchase of Elite Sets.