Rainbow Six Wiki
Register
Don't have an account?
Sign In
Advertisement
in: Under construction, Chimera Parasite, Factions of Extraction, Bio-Weapons

The Chimera Bacteria, more commonly known as the Chimera Parasite or simply Parasite, is an alien organism that has arrived on Earth. Humans infected by the organism are known as Roaches. Years after its arrival, the organism has evolved to not require a host, spawning the Archæans.

The Chimera Parasite originated approximately 16 billion years ago before the formation of the known Universe. During inflation it was carried across vast distances of space by meteorites and spread throughout the Universe. Billions of years of inactivity spent on these meteorites led these Parasite strains to become dormant and eventually fossilize before they were eventually deposited across an unknown number of worlds. At least three meteorite's carrying the Parasite were known to have landed on Earth.

The first and oldest known instance of a meteorite carrying the Parasite crashed on Earth on June 30th, 1908, resulting in the Tunguska event. For the next 50 years, the Tunguska meteorite was studied by the Russian Empire and later Soviet Union. Through unknown means, this strain of the Parasite became active once again but was able to be contained. During the 1960s, the Soviets sent a cosmonaut into space aboard a Soyuz Capsule as part of its lunar program. All communication with this cosmonaut was lost as they had somehow become infected by the Tunguska strain of the Parasite and eventually mutated into an Apex.

Meanwhile, two other meteorites carrying the Parasite were known to have landed on earth. The first meteorite landed in the Antarctic's Eurydice Peninsula while the second landed in Alaska. The biotech company Orpheus was subsequently established in the 1950s with the goal of recovering and studying these meteorites. The Eurydice Peninsula meteorite was taken to the Orpheus Research Center while the second meteorite was taken to an Orpheus lab within an abandoned missile silo near the meteor crater.

The Soyuz Capsule later returned to Earth in early February 2018 and crashed near Truth or Consequences, New Mexico. Boyd Brooks witnessed the crash and loaded the capsule onto his truck and took it to his garage at his salvage yard. He then posted a listing of the capsule online in hopes of selling it. Unfortunately, Boyd came into contact with the Apex inside when he opened the capsule, infecting himself and starting the Truth or Consequences Outbreak.

Over the next ten days, the Parasite infected the majority of the town's population, though government officials were able to contain it for the time being. Rainbow was later dispatched to the town to help with containment efforts. Through the destruction of a nursery and arch spines, the Parasite was successfully contained for the time being. Unknown to the rest of the world, however, the growth of the Parasite in T-or-C caused the dormant samples within Orpheus' missile silo lab in Alaska to reactivate. Orpheus managed to seal the lab before the Parasite could get out of control. Realizing the trouble the Parasite posed for the company, Orpheus started to bury all research it had and tried to cover up it's involvement.

A few years later, the Parasite started to adapt based on its encounters with humanity and began burrowing itself into the Earth's crust to break containment. It eventually evolved and reemerged. No longer requiring human hosts, the Parasite started to produce Archæans in order to defend itself. It then sought to spread itself across the planet. The Parasite managed to reawaken the dormant samples of itself at the Orpheus Research Center in Alaska. It also reawakened previously unknown strains of itself that were located across the world, notably in the United States, United Kingdom, South Africa, Haiti, and Tasmania.

In response to the Parasite's reemergence, governments across the world created a subdivision of Rainbow called REACT. During periods of Parasite dormancy, REACT set up containment zones around afflicted areas in an attempt to keep the Parasite in check and study it. As the Parasite regularly enters periods of activity and dormancy, REACT recalls their scientists and sends Operators into containment zones to conduct the most dangerous research studies. Despite REACT's efforts, the Parasite has continued to evolve which led to the activation of REACT's Crisis Protocol.

The principal form of the Parasite is a biofilm colloquially known as Sprawl. Sprawl is a bacterial network that produces quantum properties which enable it to share nutrients, energy, and information across vast distances. As a result, all strains of the Parasite in the Universe are considered to be one organism. This ability also enables the Parasite to reawaken dormant or fossilized strains of itself when in proximity to one another. This leads the parasite to actively seek out worlds with it's genetic signature. Once active on a planet, the Parasite will build mass and spread itself across a world by assimilating all complex organisms into itself. Once a planet takeover is complete, the Parasite will share the resources and information it has gained with itself on another world to start another planet takeover.

A Parasite infestation starts by first infecting organisms that pose the most threat to it, mutating them into Roaches. This is done through spores released into the air or by direct contact. Roach mutations are dependent on the needs of the Parasite and its environment. They are also influenced by the Parasite's memories from encounters on other worlds. A Roach's primary role is to act as a defense mechanism in a similar manner to white blood cells in an immune system. As the Parasite gains mass through the assimilation of organisms, it will start to expand and will produce large carapace structures.

Once the Parasite has reached a critical mass, it will stop infecting hosts and will start the production of Archæans. Archæans are composed entirely of Chimera cells though their exact composition remains unknown. As with Roaches, Archæan variants are produced based on the Parasite's environment. They are also granted further protection from threats through the specialized covering of carapace on areas of their bodies. Archæans communicate the presence of threats with one another by releasing an audible howl. With Archæans, the Parasite becomes more efficient in the production of defenders for its "immune system". This in turn enables it to focus on assimilating more mass and expanding further. The Parasite will continue to assimilate and expand until it has effectively taken over a planet.

Humans infected by the Parasite mutate into Roaches. Five different variants have been observed:

This section has a Codex Entry. 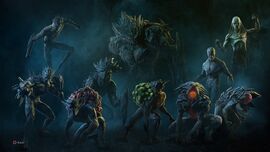 Archæans, nicknamed Archies by REACT Operators, are an advanced form of the Parasite that no longer require human hosts. Thirteen different variants have been observed:

Areas infected by the Parasite have been shown to be covered with several biomass structures:

Chimera Mutations are adaptations of the Chimera Parasite in response to the threat REACT poses to its existence. A total of eight mutations are currently known.