"Team Rainbow has been called to safeguard the seashore of Ibiza, Spain. Two of G.E.O.'s most resourceful Operators have been selected to provide their unique tactical expertise to the unit. Stationed on Ibiza’s rocky shore, course through Balearic ruins and navigate booming bars to neutralize the threat. Get ready for a surround flow of combat laced with chaotic rushes as you explore a paradise gone wrong."
— Ubisoft Description[1]

Coastline is a map featured Tom Clancy's Rainbow Six Siege, introduced in the Operation Velvet Shell expansion. The map is set to receive a minor rework in the Crystal Guard expansion. 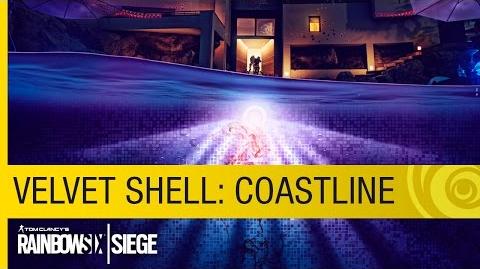