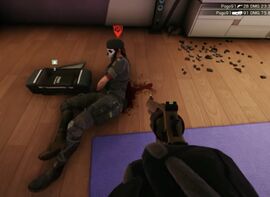 In Tom Clancy's Rainbow Six Siege, a player in the DBNO state is "downed" or incapacitated. Players will always enter DBNO unless all health has been lost while rappelling or as a result of explosives. They will be unable to stand or defend themselves and have to seek help from teammates before getting damaged again. Their vision is darkened, and cannot perform most actions such as viewing cameras, using weapons and gadgets, but they can still manually ping. After being downed, the Operator can only take 20 more Hit Points of damage before dying. They will also slowly bleed out and eventually die regardless of any damage.

DBNO players can perform two courses of action: hold down their wound with the Interaction button to slow down the bleedout timer by half or not hold down on the wound in order to grant themselves the ability to move around by slowly crawling. The bleed time is the same for all armor types. Moving also leaves a bloody trail on the floor. Outside of guaranteed DBNO attacks, each Operator can only be downed once in a round. The second time they enter the DBNO conditions, they will die instantly. In most cases, a melee attack or a headshot will override the DBNO state, instantly killing an Operator.

When the last player on a team is downed, they will be instantly killed, ending the round with a victory for their opposing team. This instant kill does not happen if:

The Hostage can also go into a DBNO state, while having a slightly higher DBNO buffer than an Operator's. Although the purpose of this trait is to grant both Attackers and Defenders more time to revive the Hostage if necessary, this also makes it possible to make the game go into overtime by having the hostage in their DBNO state. However, the Hostage's DBNO state will be overridden if they are killed by an explosive or are shot in the head.

Certain Operators have abilities that affect the DBNO state for themselves and/or others. 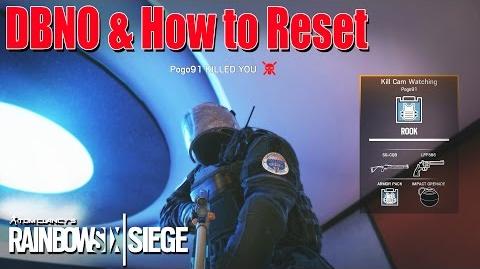 Down But Not Out (DBNO) & the Reset

In Tom Clancy's Rainbow Six Extraction, DBNO functions in a similar manner to its counterpart in Tom Clancy's Rainbow Six Siege. DBNO will only be entered if the Body Armor and Revive Kit REACH Tech are equipped and Operator HP has reached zero. If those gadgets are not equipped, Operator will instead enter KO status and the MIA Rescue mission objective will activate. A player is only able to enter DBNO once during an Incursion and will enter KO status after losing all of their health the second time.

While in DBNO, a player's vision is darkened and their health bar will slowly deplete as they bleed out. Players will still be able to crawl around the area and can fire their sidearms at enemies. DBNO will not stop enemies from attacking players which will cause them to bleed out faster. With the help of teammates, a downed Operator can be revived from the DBNO state. By interacting on a downed teammate, the bleed timer is paused. Once revived, the player returns to a non-downed state and regains 25 HP. If the last player is downed, all players will enter MIA status instantly and the Incursion will be a failure. This does not happen if the player has an Operator ability or gadget that allows them to self-revive.

Certain Operators and gadgets have abilities that affect the DBNO state for themselves and/or others.