Tiny bulletproof window slits are built into the Deployable Shield, allowing both sides to see through the Shield. Players directly behind the Shield get a slightly larger vision advantage, though Stun Grenades will disorient those who see the flash through the slits. This also applies with Ying's Candelas and Blitz's Flash Shield.

Deployable Shields snap to adjacent walls and doorways when deploying. In the case of doorways, the Shields block an entire standard-width doorway completely. They provide more solid cover than wooden Barricades, and force Attackers to vault over them or destroy them with explosives. Oddly enough, two cannot be placed side by side in a double width doorway unless they are placed simultaneously on each side by two separate Defenders.

Deployable Shields are bulletproof, but not explosive proof, and will be instantly destroyed by explosions. Explosive gadgets include:

Aside from explosive gadgets, shields can also be destroyed by the following gadgets:

Standing on top of a Shield will instantly destroy the shield; this is a measure to prevent players from using Shields as a platform to stand on, as the top of the Shield contains a very thin platform that could be vaulted onto from the side and stood on.

Front side of the reworked Deployable Shield

Back side of the Reworked Deployable Shield

Front and Back side of the Reworked Deployable Shield 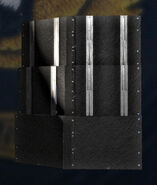