Desert Village is the third mission in the PC version of Tom Clancy's Rainbow Six: Lockdown. The mission sees Rainbow defying NATO orders and attempt to rescue Dieter Weber after he was captured following his helicopter crash. The mission's console counterpart is Operation Archer.

Onsite coordinator: Ayana Yacoby Dieter Weber was captured by Faisal Amidan and his militia, as he was evacuating Malzir. NATO is not authorizing a rescue attempt. Weber was last tracked deep in the Sahara Desert. Rainbow is ordered to return to Hereford immediately.

Dieter Weber's helicopter was shot down by Amidan's men as he was attempting to leave Malzir. Intel confirmed that Weber survived the crash but was captured by the local militia and handed over to Amidan. He was wearing a tracking indicator but we lost the signal a short time ago. Maybe they found it or maybe he's underground. Either way, we aren't receiving the signal anymore. NATO has examined the situation and they feel that Weber's loss is acceptable. They're not authorizing a rescue mission as their analyists believe that a rescue attempt will result in losing the whole team. Intel informed me that Weber's last known position was a cave complex in the Sahara. I can't order you to take action but since I'm not able to help you, if you were to go in you would need someone else to serve as on-site coordinator like Yacoby. I have to order you to return to base. Rainbow Six out. 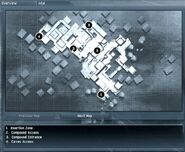 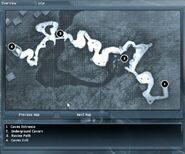 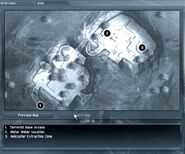 Desert Village Walkthrough Part 3
Add a photo to this gallery
Retrieved from "https://rainbowsix.fandom.com/wiki/Desert_Village?oldid=72522"
Community content is available under CC-BY-SA unless otherwise noted.