Distillery is the eighth mission in the PC version of Tom Clancy's Rainbow Six: Lockdown. Its console counterpart is Operation Chimera.

Onsite Coordinator: Alistair Stanley
The United Fatherland Brigade has a cell working out of the Loire Valley. One of the world's most wanted men, Derek Mergen runs this cell. The Terrorist cell is using a brandy distillery as a front for a training compound. Infiltrate the compound and capture Derek Mergen.

The raid on the United Fatherland Brigade terrorist base in the catacombs under Paris uncovered information about another cell in the Loire Valley. Intel believes one of the world's most wanted men, Derek Mergen, is using a brandy distillery near the town of Olivet as a front for his terrorist organization's operations. Located beneath the main facilities of distillery is a training compound where intel believes Mergen to be hiding. Your orders are to search the distillery for Morgan and bring him in for questioning. Chavez, you'll be taking Lofquist, Pak, and Loiselle. Rainbow Five out. 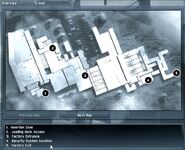 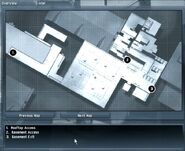 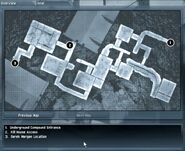 Distillery Mission Walkthrough
Add a photo to this gallery
Retrieved from "https://rainbowsix.fandom.com/wiki/Distillery?oldid=61051"
Community content is available under CC-BY-SA unless otherwise noted.