< Doc
Edit
watch 01:54
Arcane: League of Legends - The Loop
Do you like this video?
Play Sound

"You have a better option on the table? Because we're barely containing this. And I hope you have a solution that doesn't involve a nuclear response?"
— Doc to Ash

In February 2018, a mysterious alien Parasite dubbed the "Chimera virus" was unleashed on the town of Truth or Consequences, New Mexico. Over the next ten days, the parasite infected the majority of the town's population though government officials were able to successfully contain it for the time being. Those infected by the parasite began to be known as "Roaches". At the request of Eliza "Ash" Cohen, Aurelia "Six" Arnot sent Doc, Jordan "Thermite" Trace, and Alexsandr "Tachanka" Senaviev to meet Ash at a command center outside of the city and initiate Operation Chimera.

Ash was on a video call with Doc when Thermite and Tachanka arrived at her command center. Doc showed them an infected severed arm and displayed how the parasite mutated to "create monsters". Afterwards, Doc participated in several missions within the town such as the destruction of nests at the town's Sierra Paradose resort

Doc later arrived at the command center in person to discuss Dr. Ellen Mackintosh who was trapped in the town's hospital. Rainbow was aware that Mackintosh had taken samples of Boyd Brooks' blood following his infection and was trying to develop a cure before the hospital was overrun. This led Doc to theorize that she had been successful in her efforts and that she should be rescued. He then stressed that a cure would allow him to stop working in a tent surrounded with explosives. Ash told him that he could not afford to be a humanitarian in their current situation. Doc then asked Ash if she had a better option as they were barely containing the outbreak as it is. He also told her that he had overheard talk of detonating a nuclear bomb on the town and hoped she had a better solution. Ash conceded and approved a mission to rescue Mackintosh.

Rainbow was able to save Dr. Mackintosh from the hospital's serology lab and recover her research and Boyd's blood samples. Afterwards, Doc helped secure and the Soviet capsule where the Parasite originated which allowed Marius "Jäger" Streicher to extract it back to base with an Osprey. Despite their efforts, Mackintosh was ultimately unable to create a cure and the town was unable to be saved.

Over the next few years, the Parasite broke containment and had evolved into the Archæans, spreading to other areas in the United States, notably New York City, San Francisco, and Alaska. New containment zones were subsequently established around afflicted areas. Doc joined Rainbow's new division, REACT, and helped conduct various missions to gather information to stop the Archæans. At an unspecified point, Yumiko "Hibana" Imagawa was captured by the Archæans. Following Hibana's rescue, Doc was aboard the extraction helicopter and treated her.

Doc understands that in combat, the best medicine is often fire superiority. An invaluable asset in containing the Parasite in N.M., he was added to the REACT roster the moment the new threat appeared. Doc's skill as a medical provider is matched only by his tactical expertise and his commitment to seeing the Archæan threat neutralized. His STIM pistol provides instantaneous healing and revitalization to himself or his teammates.

Fires his Health Pistol to heal or revive himself or his teammates when Downed. 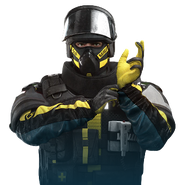