Start a Wiki
watch 01:50
The Loop (Games)
Do you like this video?
For the mission in Iron Wrath, see Operation Tower Shark.

Docks is the tenth mission in the PC version of Tom Clancy's Rainbow Six: Lockdown. Its console counterpart in Operation Breakpoint.

Onsite Coordinator: John Clark
Intel has information about the Marxist Radical Front. A weapons deal is scheduled to take place at the Calais docks in France. The French counter-terrorist group, GIGN, is assisting in the raid at the docks. Secure the area and capture the arms dealer.

Intel has learned that the Marxist Radical Front is attempting to acquire weapons from one of France's most wanted black-market arms dealers. For the help of GIGN, the French counterterrorism team, you're gonna raid the docks at Calais. Your orders are to take the terror group down and capture the arms dealer. Chavez, you'll be taking Price, Raymond, and Yacoby. Six out. 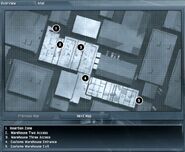 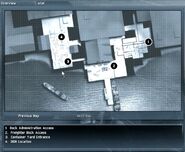 Docks Mission Walkthrough
Add a photo to this gallery
Retrieved from "https://rainbowsix.fandom.com/wiki/Docks_(Lockdown)?oldid=62383"
Community content is available under CC-BY-SA unless otherwise noted.