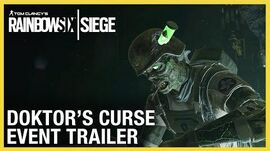 Doktor's Curse is a limited timed event in Tom Clancy's Rainbow Six Siege that was introduced during the Operation Ember Rise expansion. It took place from October 23, 2019 to November 6, 2019. The event returned during the Crystal Guard expansion on October 12th, 2021 and ended on November 2nd, 2021.[1]

The Hide and Seek gamemode takes place on a modified version of Theme Park known as Doktor's Castle. Following the theme of a mad scientist, the map has been made to resemble something akin to Frankenstein's castle. Attackers and Defenders are known as Hunters and Monsters respectively.

Following the closure of Theme Park, something wasn't quite right with Doc. He moved his equipment into the park castle and made it his home. It was then that he started to perform disturbing experiments on his fellow Rainbow operators. In the end, he created something more evil than he had intended. Now monsters roam the castle and a band of exterminators have been called upon. With Doc busy experimenting on Bandit, it was up to the Hunters to capitalize on this opportunity and cleanse the castle.

Despite their efforts, the Hunters were unable to stop Doc. Lion and Jackal were captured and were turned into monsters themselves. Doc later left the castle for unknown reasons, leaving a vampiric Kaid in charge. As the last remaining hunter, Sledge returned to the castle and freed Lion and Jackal. Despite their differences, they have agreed to exterminate Doc's experiments once and for all.

The objective of Hide and Seek is for one team to eliminate all members of the enemy team or for the Monsters to survive the two minute time limit each round.

Unlike normal multiplayer, both teams do not have access to weapons and cannot melee. The Hunters/Exterminators only have access to modified versions of Sledge's Cabre and their unique tracking abilities. Monsters have no means to attack Hunters directly. Instead, they have access to one Reinforcement and their respective Operator traps. Traps will also replenish over time, encouraging players to plant them and avoid Hunters. Monsters also have access to an ability known as Nightstride. Once activated, it temporarily makes Monsters completely invisible to Hunters and increases their movement speed. Despite this, the ability has a cooldown effect and may only be used three times by a player during a round. Additionally, it does not prevent detection by the Heartbeat Sensor or EE-ONE-D.

The mode limits players to choosing between five Monsters and three Hunters. A single Hunter may be chosen more than once by players.

The mode limits players to choosing between seven Monsters and three Exterminators. A single Hunter may be chosen more than once by players.

All players are awarded a free Alpha Pack for logging in for the first time during the event. Afterwards, packs are obtained through completing Ubisoft Connect challenges or by purchase. Alpha Packs may be purchased with 12500 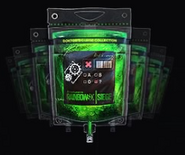 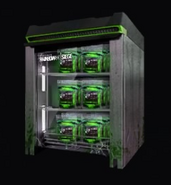 Players may purchase event cosmetics in bundles for each Operator featured in the event. Operator Bundles cost 1680

apiece. Additionally, the event features several cosmetics not available in the Alpha Pack collection that are exclusive to bundles and are available for varying prices. 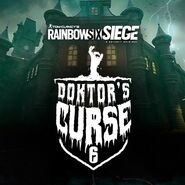