Domingo Chavez was born in Los Angeles, California on January 12, 1968. He grew up in a poor area of East Los Angeles where he joined a local gang called the Bandidos. In 1979, one of his close friends was killed in a drive by shooting. This event made Chavez realize that there was no future in a gang and prompted him to enlist in the military. After being rejected by the US Marine Corps, a US Army recruiter signed him up in order to meet his monthly quota, despite the fact that Chavez was near illiterate and had not yet earned a high school diploma.

Chavez was first stationed in South Korea to provide security at the DMZ. One night, North Korean infiltrators entered the DMZ and slit the throats of two men in Chavez's platoon. Their bodies were later discovered by Chavez the next morning. Chavez realized how serious his job was and became motivated to master it. He attempted to pay close attention to lectures and take notes but struggled due to his lack of a formal education. His platoon leader noticed this and helped him to earn his GED and a promotion to Specialist Fourth Class by the end of the year.

By 1984, Buck Sergeant Chavez was assigned to Bravo Company, 3rd Battalion of the 17th Infantry Regiment under the 7th Infantry Division near Monterey, California. Chavez was assigned to lead a squad of nine slick sleeves and was eventually promoted to Staff Sergeant. During operations, Chavez and his team became skilled in stealth, raids, infiltration, and intelligence gathering.

In 1988, Chavez received orders to become a drill sergeant with the Army's basic training at Fort Benning, Georgia. Before he could out-process however, a CIA agent named Edgar Jeffries arranged for a meeting with Chavez. Disguised as an Army Colonel, Jeffries recruited Chavez into the CIA's Special Activates Division with the promise of a promotion and a chance to repay his country for all the training it had poured into him. Chavez was placed on a black ops team, CAPER to undertake a secret a secret war against the Medellín Cartel in Colombia. During the operation, Chavez grew to look up to his squad leader, CIA Agent John Clark, who later became his mentor. Following CAPER's exposure, Chavez was rescued by Jack Ryan and Clark after the government abandoned them for political reasons. Chavez later married Clark's daughter Patricia Clark.

In 1991, National Security Advisor Elizabeth Elliot engineers a smear campaign against Jack Ryan, accusing him of having an affair and fathering a child. John Clark and Chavez convince Ryan's wife that the allegations are false. In 1994, Chavez and Clark rescued the former Japanese Prime Minister. In 1996, Chavez helped Clark implement "Plan Blue" which saw the recruitment of law enforcement officers as intelligence officers. This would lead to the formation of the multinational counter-terrorist organization Rainbow in 1999.

With the formation of Rainbow, Chavez was given the simulated rank of Major in the organization with his new role as leader of Team 2. In their first major operation, Rainbow faces Phoenix Group/Horizon International, which plans on releasing an Ebola virus to remake the world in their image. Chavez leads the team in capturing CEO John Brightling.

Xander Thiessan, a convicted terrorist, approaches Rainbow with information about weapon smuggling and wants a single operative to extract him. The powers that be choose Ding Chavez as his profile fits this case perfectly. Chavez frees Theissan and then storms the terrorist base.

Two years later, RAINBOW is again called into action, this time to hunt down and neutralize a "Rogue Spear", or a non-state entity possessing and distributing nuclear weaponry. Chavez leads Team 2 through multiple missions and eventually take down the leaders of the operation, Russian mob boss Maxim Kutkin and arms dealer Samed Vezirzade.

Shortly after the events of Rogue Spear, RAINBOW is again put to the test, when a mentally disturbed ex-SAS operative challenging the black-ops unit to reenactments of actual terrorist attacks, including the Japanese Embassy Siege. Chavez, along with the rest of the RAINBOW operatives, pass each test and ultimately neutralize the ex-SAS operative.

In 2005, Chavez leads the investigation of a series of attacks committed against South American oil sources and European financial districts. RAINBOW eventually traces the attacks to Argentinian billionaire, Nikola Gospic. Sixty years earlier, Gospic was a Nazi official in Croatia, who escaped with huge amounts of Holocaust loot before Allied troops could move into the capital. Now Gospic is dying of cancer of the liver, and plans to leave one last legacy of hate for the world by resurrecting the international Fascist movement. To do this, Gospic, through his vast financial wealth, has acquired VX Nerve and Blister gas, which he intends to distribute throughout South America through his ownership of a meat packing plant. However, RAINBOW catches wind of this plan, and leads a raid against the plant, effectively stopping the plan.

The same year, Chavez joins in an operation to free hostages in the Píc des Pyreneés. Lieutenant Monroe is killed and Gabriel Nowak is wounded.

In 2008, Rainbow becomes embroiled in a plot by Russian oil monarchs to create a new country in the Caucusus. Chavez is ordered to single-handedly assault their military base and stop the warhead launch.

The following year, Chavez leads Alpha Team in stopping the GLF in deploying the Legion virus. The team hunts down and eliminates Bastian Vanderwaal.

In 2010, Clark steps down and assigns Chavez as the new Six. As he cleans out his office, he reminisces about previous Rainbow assignments.

In July 2010, Chavez briefs the Rainbow operational teams during the hunt for Irena Morales, which spills into a terrorist attack in Las Vegas. Eventually, Bishop is wounded uncovering proof that Nowak is behind the attack. Chavez grounds the team, although they disobey orders and confront Nowak in Costa Rica, and Bishop neutralizes him. In response, Chavez pulls Bishop from the Academy and appoints him/her as deputy Rainbow director.

Rainbow was later shutdown in 2012. It is unknown what became of Chavez and the other members of Rainbow.

In an alternate timeline, Chavez was still Rainbow's director in 2019. However, on March 4, he received orders from the European Federation that they were withdrawing support from NATO. He ordered Logan Keller's Team 1, which was in Pakistan, to terminate their operation and return home. Keller disobeyed the order and stopped Takfir's weapon trucks, following the example of Chavez in Africa.

Chavez is operational leader of Rainbow Six. Put him in command of the team with the most important objectives. He is expert at firearms and stealth, with good experience in several other areas. His high leadership value boosts other team members with lower self-control and teamwork attributes. Put less-experienced operatives in his team. You will probably want to control Chavez, but because he will follow your orders better than anyone else, you should leave him under AI control.

Chavez is ambitious and confident, and he studies everything he sees, looking for new perspectives and lessons. He's an educated career soldier who feels indebted to the military and to his country. His origins were humble, and he has never forgotten the opportunities afforded him by the Army. Chavez is extremely devoted to his wife, Patsy, who is the daughter of John Clark. He regards Clark as a mentor and father figure, and is fiercely loyal to him. A man who watched a childhood friend die on the streets of Los Angeles, Chavez understands the opportunities that were afforded him by the military, and he feels a profound sense of a debt to the Army. He is a natural leader, and an ambitious man who takes pride in his accomplishments. Chavez also knows how to have a good time, and has established a strong rapport with his Rainbow teammates. 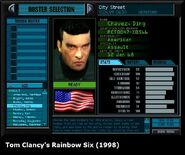 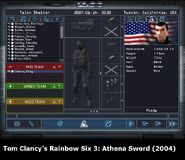 Retrieved from "https://rainbowsix.fandom.com/wiki/Domingo_Chavez/Video_Game?oldid=77407"
Community content is available under CC-BY-SA unless otherwise noted.