For the version of the virus that appears in the Rainbow Six novel, see Shiva virus. 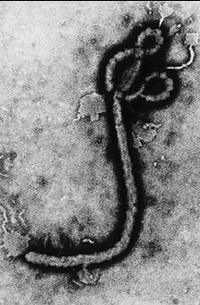 is a member of a family of RNA viruses known as filoviruses. When magnified several thousand times by an electron microscope, these viruses have the appearance of long filaments or threads. Ebola Brahma was discovered in 1998 by Dr. Catherine Winston in the cattle population of West Africa. An infected cow will manifest the following symptoms: loss of appetite, fever, and disorientation during the early stages of the disease; vomiting, diarrhea, and bleeding from bodily orifices in later stages. In 97% of cases, death occurs from total systemic collapse within 72 hours of first onset of symptoms. The incubation period is believed to be 14 days. Unlike other known filoviruses (with the possible exception of Ebola Reston), Ebola Brahma is airborne. Until recently it was not believed that Ebola Brahma was infectious to humans.

The Ebola family of viruses is named for the river in Zaire (now the Democratic Republic of Congo) where the first stain was identified in 1977. In addition to Ebola Brahma, four strains are known to exist: Ebola Zaire, Ebola Sudan, Ebola Reston, and Ebola Tai. The Reston strain causes illness only in primates, but the others are potentially lethal to humans. All are classified as level 4 biohazards.

Retrieved from "https://rainbowsix.fandom.com/wiki/Ebola_Brahma?oldid=68906"
Community content is available under CC-BY-SA unless otherwise noted.