View source
watch 01:36
Rainbow Six Profile: Echo
Do you like this video?
Play Sound
Not to be confused with Echo Team

Masaru Enatsu grew up in Suginami City, Tokyo. He and his family were never close with one another, leading him to become resistant to working in groups. Fascinated with robotics from an early age, he designed and programmed both terrestrial and flying drones capable of search-and-rescue missions in highly difficult conditions. Two years later, he won the International Aerial Robotics Competition (IARC) along with numerous other competitions. This made him known to push the limits of what flying robots could accomplish.

After his studies of Electrical and Electronic Engineering at the Tokyo Metropolitan University, he was encouraged to join the National Police Security Bureau. Following his graduation from the National Police Academy a year later, Enatsu joined the Tokyo Metropolitan Police Department Special Unit. He worked tirelessly in the department's research and development lab in order to test his devices on the field. Trained in counter-terrorism and intelligence gathering, Enatsu began designing specific tech that would better aid the Bureau.

In 2005, he collaborated with Hong Kong Special Duties Unit where he met Siu Mei Lin. Both of them became romantically involved with one another before breaking up a year later. Joint training after the 2007 Nagoya hostage crisis prompted Enatsu to transfer to the Aichi Prefectural Police Department Special Unit where his tenacious focus enabled him to find creative solutions and alternate strategies.[4]

In 2016, Enatsu accepted an invitation to join Rainbow as a field operative. His technical knowledge and skills also made him a prominent member of Rainbow's R&D division.

Efficiency-obsessed and blunt, Enatsu is a talented officer despite his apathetic nature. Singularly focused, Enatsu's blunt communication style divides group harmony. His tendency to dismiss feedback has kept him from advancing to a higher rank.[5]

To say that Specialist Masaru "Echo" Enatsu's file has a few flags regarding his conduct is an understatement. Prior to our first session together I had met with every other member of Rainbow – some more than once. So when the conversation began with Enatsu admitting he'd been avoiding me, I knew we were going to get along.

Often, I would rather not read a file first, to give someone a chance to tell me who they are in their own words. In this case it was important that I know what people think, because Enatsu was braced for my reaction.

I gather he and his family aren't close. He joked that a calculator has more emotional range than his parents. This upbringing has made him resistant to working in groups, because a friendly, mutually beneficial dynamic isn't one he's familiar with. It's my hope his time with Rainbow will help, but his desire to explore the "Al" of his fellow operators by pushing their buttons is something that may need to be handled from within the group.

Enatsu's tactics have been described as tricky and unpredictable. This can work as a strong team strategy but it demands communication.

I'd also encourage the team to think of how best to utilize Enatsu's potential. Some operators assume there will be issues with him before they even begin, which leads to predictable results.

Specialists Yumiko “Hibana" Imagawa and Grace "Dokkaebi" Nam work with Enatsu on R&D quite often, actually. I've also noticed that he's developed a rapport with Specialist Taina "Caveira" Pereira. I suspect he appreciates Pereira's candor, since it ties into his own assumption that people who are offended simply don't "get the joke."

Enatsu frustrates easily. He has few outside interests, and consequently thinks only about improving his operational efficiency. It's important that he recognize that everyone needs diversions – those in high-stress jobs even more so. It isn't a sign of weakness to "switch off" every now and again, even if he has been conditioned to believe that a restful mind indicates a lack of intelligence.

A Heavy Armored Operator, Echo's unique gadgets are two hovering drones called Yokai, which can stick to flat surfaces on a ceiling, as well as emit ultrasonic bursts that can disorient the enemy.

Wanting to circumvent ranged weapon limitations, Echo crafted Yokai, an unmanned hovering vehicle. Equipped with an acoustic hailing device, this signature drone can fire ultrasonic bursts that disorient all targets in a given perimeter. Yokai also transmits a video feed to Echo, who keeps his immediate perimeter secure. Embrace the power of technology and embody a turret Defender who can both hold up the siege and support roamers.[3] 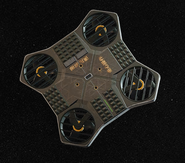 Evaluation Lead: Specialist Masaru "Echo" Enatsu with Specialist Jack "Pulse" Estrada (because he wouldn't leave me alone – say two words, "transmit pulses," and he's all over you like a dirty shirt. Also, explain to me the obsession with learning Japanese?)

(Comment_J. Estrada: Can't a guy just want to be a better guy?)

(Comment_E. Alvarez: Can you two comedians please make sure these comments are cleared before Harry sees the file? Mira.)

(Comment_Dr. H. Pandey: Too late! Seriously though, nothing to worry about.)

I'm all for working late nights in a state-of-the-art lab but since the cafeteria started including katsudon (!!!!) I think Mira doesn't want me to go home at all.

Evaluation of the Yokai went well. Results are attached. I'd like to conduct further tests on electro-acoustic transducer frequencies. Maybe I can coordinate lab time when Pulse *isn't* here.

(Comment_J. Estrada: And I thought we were buds.)

Echo's current model. Note that 田波 has been replaced with 江夏.

Echo armed with the SuperNova

Echo armed with the MP5SD 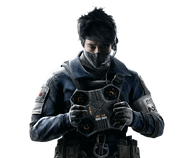 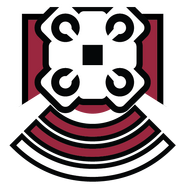 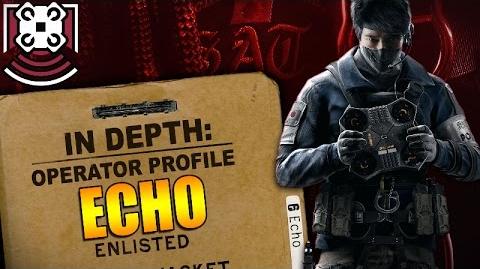