He was introduced on August 11th, 2022 as part of the Eclipse Crisis Event and is unlocked by default.

Echo's unique gadget is a hovering drone called Yokai, which can fly around the area as well as emit ultrasonic bursts that can stun enemies 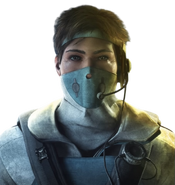