watch 01:12
Who Is Ela Bosak?
Do you like this video?
Play Sound

"It's a brutal, dangerous world out there, but I've found my way. Chaos is my home, and I'll make sure you never escape it."
— Ela Operator Video

Elżbieta Bosak was born in Wrocław, Poland. She is the youngest daughter of Jan Bosak, former commander of the Polish Special Forces unit GROM. She is also the younger sister of Zofia Bosak. Growing up, her father favored Zofia, causing a rift between them. Despite this, Zofia was highly protective of her sister.

Ela's grandfather played a significant role in her life. He would often share stories with her about his time as a Cichociemni of the exiled Polish Army during World War II and how he had endured a three-month-long siege of Breslau. He nurtured her defiant spirit and taught her that “higher damage is done by striking a supply chain than by neutralizing a man.” This defiant personality caused Ela to initially struggle to commit to the strict military lifestyle.

Ela attended her father's military school along with her sister but often experienced several difficulties. She was bullied constantly due to the special attention she received as the GROM Commander's daughter. An incident six months before her graduation resulted in her expulsion. She had a short-lived transition in another academy, before her lack of attendance caused her to be transferred to a small local high school.

After graduation, she left Poland behind and set out for Berlin to experience life on her own terms. There she studied Fine Arts, but her interest started to fade as the appeal of her old life slowly caught up with her. Her reputation for using military paraphernalia in her art attracted the owner of a small private security company, who offered her a job. Craving the adventure and financial independence, Ela accepted, hoping that her role as contractor would differ from the simplistic compliance she experienced at the military academy.

Working as a PMC, she was valued in the private sector for her expertise in survivalist tactics and unique adaptive style during protective detail and intelligence gather. Ela gained a reputation on the field during her first years of deployment in Iraq. Known to possess an impressive range of abilities, her attitude was the only obstacle standing in her way. While she was seen as a prized addition to any squad, her employers monitored her closely to investigate reports of authority issues. Four years after leaving Poland and following a rough operation in Baghdad, she received the news that her father had taken his own life.

A few months after her father's death, Ela terminated her contract and started training relentlessly to pass the GROM selection as a civilian. Impressed by her determination and prowess on the field, the GROM saw in her a rare opportunity and took her in. She then joined her father's unit as a way to keep his memory close and make amends. Amidst the Polish Forces, she developed an expertise in Countering Threat Networks (CTN) and helped design advanced exploitation methods to extract intel on a target's intentions and supply routes.

One of her most well-known ventures is Operation Orange Sky. Joined by Valkyrie, SEAL's intel expert, Ela spent months infiltrating a warlord's inner circle before dismantling his network without harming a single civilian. Her collaboration with SEAL proved so fruitful that she was tracked down and recruited by Rainbow in 2017 — a first for this international group of elite specialists.[2]

Independent, creative, and rebellious, Elżbieta is intimate with the risks involved with her particular role, having suffered many losses in Iraq. The sudden death of her father provided her with a profound need for purpose. Elżbieta internalized the belief that she must prove posthumously her worth to her father and make amends. She uses her memory of him to push herself to unrealistic standards and to lead high-risk operations.[3]

We civilians can understand Specialist Elżbieta “Ela" Bosak's independent nature more than some starch-collared military commander might. Of course, following orders is expected of those within the rank-and-file, and for someone so quick to buck against authority she also expresses a deep respect for the military and her role within it. It's her autonomy that rubs traditionalists the wrong way, and perhaps her anger. Even at our first meeting, I detected her resolve. She is fighting against something, but it may not be authority – at least not entirely. I won't dismiss the concerns of commanding officers who mention that Bosak can be impulsive, but I would urge them instead to appreciate her creative resilience. Anyone who has worked with artists can attest to this quality. It manifests in the field in the protection of her team and her high number of successful operations. Her impulsiveness – her adaptability – is the very quality that causes her to excel. Both Ela and her sister, Zofia, carry the deep impression of their father's influence. Ela is more inclined to accept that her father, though exceptional, wasn't perfect. In reviewing Commander Bosak's file, I saw a proud, insightful man. That's the key. Ela is finely tuned to the patterns and behaviors around her and when she seems defiant it's because she's frustrated with those who lack this “vision." Joining Rainbow, and working with other elite operators, has somewhat tempered this frustration as she no longer feels constrained by the attitudes of those around her. Ela's defiance extends into her personal life. She isn't interested in self-improvement, she told me. She was surprised when I said I know about her "volunteer work." She roams the streets late at night, with food and blankets to hand out, or even just a cigarette. Then she listens. Her conversations with strangers offer fresh perspectives. She stockpiles them, to add to her insight and therefore her skills, but also as fuel for her work. The status quo isn't what she wants it to be, but that won't stop her from trying to kick it into shape.

Excerpt from a print interview, 09-09. Reporter: What does identity mean to you? Bosak: All identity is performative. The complication lies in the fact that, as much as you construct your image by what you say, how you dress, and which brands you buy, you’re never truly in control. You’re always subject to a status quo, a set of expectations about how someone who looks like you *must* act. Reporter: Surely those expectations don’t carry over when we’re talking about art. Bosak: Art transcends society only when nothing is known about the artist. I don’t want to transcend society. I want to record it. Reporter: I see. So what do you say to people who claim your work is shallow and narcissistic? Bosak: I say that if you can’t see yourself in someone else’s reflection you’re not trying hard enough. Reporter: But, by doing so, aren’t you simply behaving in the way that society expects? Bosak: (laughs) Aren’t you?

A Light Armored Operator, Ela comes equipped with three Grzmot Mines; concussive mines that disorient any who come within range.

"Concussion proximity mines that can be anchored on surfaces, impairing hearing and causing a dizzying effect."
— Grzmot Mine Description

Inspired by the 1939 anti-tank Polish grenades used by the iconic Cichociemny during WWII, the sticky Grzmot mines can be anchored on surfaces, impairing hearing and causing a dizzying effect. These concussion mines are triggered upon proximity, affecting anyone within its radius.

This non-lethal explosive was specifically adapted to Ela, who is known to isolate targets from the local population to sabotage IED operations. 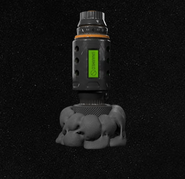 Specialist Gustave "Doc" Kateb expressed interest in seeing the test results for the GRZMOT's concussive effects so please pass on the attached data. I invited Frost along since she had finished her other evaluations and still wasn't sick of lab time. Plus she wanted to learn about proximity mines because there is no topic that bores her, and Lord knows I have tried to find one.

Anyway, controlled lab tests were straightforward and gave us enough time to get outside for additional field tests. Overall, Ela's (Specialist Bosak) GRZMOT Mines are highly responsive and effective. The proximity sensor is reliable though its electronic components do run the risk of interference (full chart included).

One final thing, I'm not thrilled to mention this but we had some issues with Ela. There wasn't a heck of a lot of cooperation. She wouldn't share much info or make herself available for testing. Then she sent messages saying we weren't including her. It's no big deal, really. I wanted to flag it here because it sidetracked us from what was ultimately a simple evaluation.

Ela armed with Scorpion EVO 3 A1

Ela armed with FO-12
Add a photo to this gallery 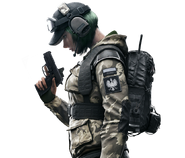 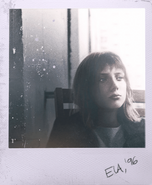 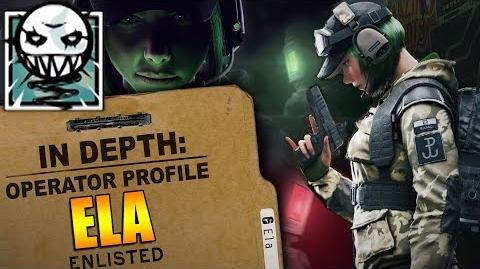 Retrieved from "https://rainbowsix.fandom.com/wiki/Ela/Siege?oldid=87384"
Community content is available under CC-BY-SA unless otherwise noted.