The Federal Bureau of Investigation (FBI) is the domestic intelligence and security service of the United States and its principal federal law enforcement agency. Operating under the jurisdiction of the United States Department of Justice, the FBI is also a member of the U.S. Intelligence Community and reports to both the Attorney General and the Director of National Intelligence. A leading U.S. counter-terrorism, counterintelligence, and criminal investigative organization, the FBI has jurisdiction over violations of more than 200 categories of federal crimes.

Although many of the FBI's functions are unique, its activities in support of national security are comparable to those of the British MI5 and the Russian FSB. Unlike the Central Intelligence Agency, which has no law enforcement authority and is focused on intelligence collection abroad, the FBI is primarily a domestic agency, maintaining 56 field offices in major cities throughout the United States, and more than 400 resident agencies in smaller cities and areas across the nation.

Despite its domestic focus, the FBI also maintains a significant international footprint, operating 60 Legal Attache (LEGAT) offices and 15 sub-offices in U.S. embassies and consulates across the globe. The FBI can and does at times carry out secret activities overseas, just as the CIA has a limited domestic function.

FBI Special Weapons and Tactics Teams (SWAT) are specialized tactical teams of the Federal Bureau of Investigation (FBI). SWAT agents are specially trained to intervene in high-risk events like a hostage and barricade situations. The FBI maintains SWAT teams at each of its 56 field offices throughout the country varying in size up to about 42 members. In the event of a large-scale problem that local law enforcement does not have the resources to handle, FBI SWAT teams from the local field office, as well as outside the local region can be dispatched to aid the local authorities.

The FBI SWAT is an available organization in Tom Clancy's Rainbow Six Siege. 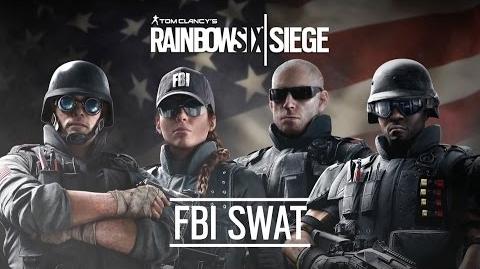