Edit
watch 02:30
Dead Cells Final DLC - The Loop
Do you like this video?
Play Sound
For other variants, see CAMRS and PARA-308

The FN FAL (Belgian: Fusil Automatique Léger; English: Light Automatic Rifle), often shortened to FAL, is a battle rifle manufactured by FN Herstal that chambers the 7.62x51mm NATO round. It is one of the most widely used rifles in history, having been used by more than 90 countries. The rifle became so popular that it was nicknamed "The right arm of the Free World."

There are variants of the FAL that exist in the Rainbow Six universe. These variants are the SA58 and the FAL 50.63.

The FN FAL and the SA58 are categorized as assault rifles in the Rainbow Six universe. Whilst the FAL 50.63 does not appear as a usable weapon, it is featured as a world model in Tom Clancy's Rainbow Six: Lockdown.

A light Automatic Rifle, it is one of the most widely used battle rifles of the 20th century. Due to its heavy recoil in full-auto mode, it's often issued in semi-auto. It uses 7.62x51mm NATO rounds with a magazine capacity of 20 rounds. 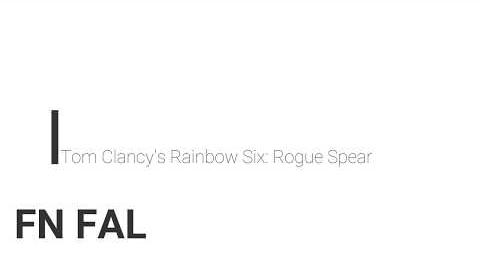 The FAL is a weapon featured in Tom Clancy's Rainbow Six 3: Raven Shield.

"A shortened version of the world famous FAL, created for American SWAT teams, this rifle fires a 7.62mm round with a high damage potential. Normally the SA-58 uses the Scope or Red Dot attachments."
— In-game description

The SA58 is a weapon featured in Tom Clancy's Rainbow Six: Lockdown. The SA58 is a usable weapon, whereas the FN FAL was cut from the game.

In the PC version of the game, the SA58 is used by the Revolutionary Brotherhood in the missions Parliament and University, by the United Fatherland Brigade in the missions Catacombs, Distillery and Hospital, and by the Global Liberation Front in the mission Mercenary Base.

The SA58 is the standard weapon of Louis Loiselle.

The SA58 is a weapon featured in Tom Clancy's Rainbow Six: Critical Hour.