"Being afraid of a disease is sometimes worse than the disease itself. There is no cure for fear, so either you surrender to it or you fight it until one of you wins."
— Finka

Lera "Finka" Melnikova (Russian: Лера Мельникова) is an Attacking Operator in Tom Clancy's Rainbow Six Siege. She was introduced in the Operation Chimera expansion alongside Lion.[3]

Lera was born in the irradiated city of Gomel, Byelorussian SSR, three years after the Chernobyl disaster. Lera and her two younger siblings grew up around children already suffering from birth defects as a result of the disaster. At age nine, Lera was diagnosed with a neuropathy that included the slow degeneration of muscles and the loss of sensation in the limbs and extremities. Her diagnosis was the realization of her fears, so when her parents encouraged her and her siblings to be physically active, she pushed herself even harder, determined to keep her body in peak condition to weather the neuropathy. Her young mind reasoned that she couldn't be sick if she stayed healthy.

All three Melnikova children grew up playing sports, with Lera excelling at those requiring agility and finesse but there was always the knowledge that the neuropathy would worsen unless someone found a more permanent solution. She decided that someone was herself.

Lera moved to Novosibirsk to study Cytology and Genetics at Novosibirsk State University and graduated with a PhD in Microbiology and Immunology. She remained at NSU in the Biotechnology and Virology Laboratory, her research uncovering treatments for a variety of pathogens and neuropathies including her own through drugs and self-dissolving nanites. While she hadn’t found a cure, she had found remission.

Lera might have stayed in the academia had she not received a visit from the Federal Security Service of the Russian Federation (FSB). Russian Spetsnaz operators and special agents faced the ever-growing danger of exposure to hazardous materials including organophosphorus agents like VX gas. For the first time in her life, Lera began thinking outside of her own concerns. Her research had saved the lives of perfect strangers, and now they were reaching out to her, sending grateful postcards and photos and letters. She could have a greater impact still. Lera jumped at the chance to work with Spetsnaz volunteers in a variety of conditions as she adapted the nanobots to their high-performance physiologies. Quickly, she came to enjoy the sense of competition, camaraderie, and the mental toughness of the Russian Special Forces members. She joined the Army with an eye on becoming a Red Beret herself, on the front lines of saving lives as a Chemical Biological Radiological Nuclear (CBRN) specialist.

Serving in the Russian Army, Lera rapidly proved herself physically and mentally tough enough to try out for the Spetsnaz. It was a brutal course, culminating in Close Quarter Battle (CQB) knife training with Kapkan. A misstep and a flourish from Kapkan, however, opened her face from brow to cheek, but Lera went for a series of bone-breaking punches to his nose and ribs before the pain overwhelmed her. They spent the night in the med tent, neither of them speaking, but enjoying a new, unspoken respect between them. From that day forward, she'd earned her moniker, Finka or "Knife."

Lera became the Spetsnaz CBRN Specialist, joining the Vympel Unit under the FSB and using her nanobots to help her unit survive hot zones; she was one of the only people capable of tailoring the nanobots to specific operators.

Her work in restructuring Russian battlefield protocols in the handling and neutralization of dangerous payloads earned her notice, and she became the go-to expert when it came to joint exercises with other CTUs. In 2018, Aurelia Arnot invited Lera to join Rainbow to help form their own CBRN Threat Unit. Following her recruitment, Lera recommended that Olivier "Lion" Flament join her on the unit for his leadership during the 2015 Nigeria ebola epidemic, to which Arnot agreed.[4]

Lera discovered that her neuropathy was slowly growing resistant to treatment. The old fears returned, every ache and pain analyzed and scrutinized as she pushed herself even harder to peak performance.

Now, she constantly tweaks and modifies her formula to stave off twinges and numbness that she imagines might be the onset of decline. She pushes herself to the point of throwing up after workouts with IQ and Valkyrie, though only Valkyrie understands that punishing limit of physical fitness. Lera unable to distinguish between the disease and normal fatigue and is driven by her fears and made excellent by them in the same maddening moment. She is not young anymore, though, but more desperate than ever to hold on to her life. She is trying to find a new treatment while keeping it a secret, but Doc knows and is closely monitoring her CMT in case it begins to affect her performance. She has not shared this with anyone else, not Kapkan who is her no-nonsense mentor, and not Tachanka with whom she drinks and flirts.

Lera has recently taken to creating a wall of letters and photos in her workspace, a reminder that her treatments are more than just about helping herself. But she’s still afraid that this might get ahead of her.[5]

Specialist Lera Melnikova has a dynamic personality that often takes a backseat in past reports because of her chronic illness. It's a shame. From the moment she entered my office with fresh coffee and croissants for our meeting, her vibrant energy swirled around the room.

While Melnikova prefers not to discuss her illness, it's clear that it looms over her every thought. Her fitness tracker constantly sets off reminders. Her thermos of water must be kept constantly topped up. She doesn't like to sit for too long, nor stand. Every movement is a calculation. She isn't fidgety or impatient, but hyper aware of each moment and careful of the needs of her body. [...]

Managing her health grounds Melnikova in the here and now. Her process — her rituals — have enabled her to achieve a high level of fitness and mental balance. It's the right approach and it works for her. My concern is that she may not be prepared for upsets to her careful order. So, I suggested that while maintaining the concept of a ritual, I'd like her to apply some variations to them. [...]

Melnikova's close connection with illness provides her with unique insight into how disability or inability affects a person's identity. Her research is driven by her sense of determination, but also guilt. She knows she can't help everyone. And frankly, it's crucial for her state of mind that she not lose sight of this. We're only human, after all. [...]

Her deep bonds with the Russian Special Forces members and her Rainbow team push her to be better and to maintain her focus. They understand the extreme level of commitment this requires. Her dedication to them is unwavering even if they don't always agree on a surface level. [...]

What stands out to me is Melnikova's wonderful, full laugh. It's a laugh that gets set aside too often when she's focused on her illness. I encouraged her to seek out those unrestrained moments of delight. Because her every decision is so carefully constructed, what would benefit her most is the ability to surprise herself.

A Medium Armored Operator, Finka comes equipped with her specially-designed nanobots. Having them injected into each of her teammates prior to each mission, her Adrenal Surge allows affected allies to gain a temporary boost in health and a reduction in recoil, on top of other small benefits.

"The nanobots give the team a brief gain in HP and revives allies in a DBNO state."
— Adrenal Surge Description

Finka delivers a nanobot shot to each operator before an operation. The nanites are made of zinc with the pharmacological cocktail laced into the nanobot’s construction. When she activates her signal, the nanobots disintegrate with the zinc being treated as a nutrient by the body and facilitating the absorption of the drugs. The operators receive a short boost of health to get them back on their feet, to give them an extra push, and to steady their aim.[3] 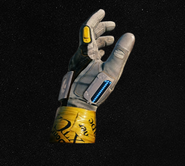 Many studies on epinephrine (adrenaline) and other hormones/neurotransmitters are giving us a clearer picture of how our minds and bodies function under extreme stress. Along with advancements in nanomedicine this field of health research is really at its most exciting.

I read Lera's PhD: her extrapolation of unproven theories about self-propelled fluids and what is now called "active" matter was far ahead of its time. I suspect she had to pull back into more respected (older) fields of study to ensure her dissertation would be accepted. Here, she has no such constraints, so I will expect full and correct terminology from now on.

As for Lera's neuropathy and her continued research, these results and the attached test plan will certainly provide her with the data she needs for future enhancements. Harry, Elena, Lera and I have all agreed to have regular discussions to keep up to date on this fast-changing field.

(Comment_L. Melnikova: I'm grateful to Doc, Mira and Harry for being good sounding boards. My research is for all of us!)

Finka armed with SASG-12
Add a photo to this gallery 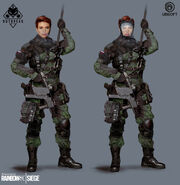 Finka concept art.
Add a photo to this gallery 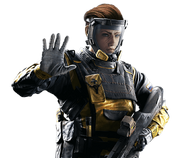 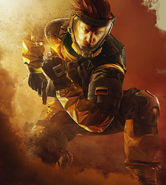 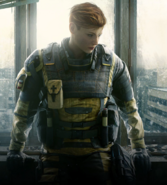 Finka activating her Adrenal Surge
Add a photo to this gallery 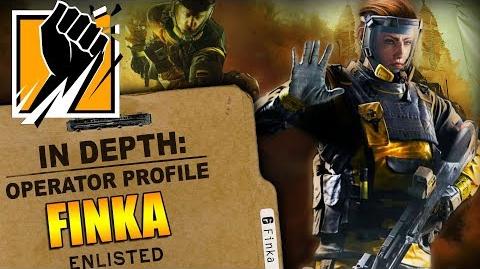 Retrieved from "https://rainbowsix.fandom.com/wiki/Finka?oldid=80764"
Community content is available under CC-BY-SA unless otherwise noted.