"Appropriately called Fortress, the map is modeled after the distinct architecture of a Moroccan Kasbah, and is designed to offer Operators a variety of tactics."
— Blog description[1]

"For Operation Wind Bastion and following a written agreement with the resident Commander, Rainbow Six has secured permission to use the renowned fortress located in the Atlas Mountains. You’ll have the rare opportunity to test your skills inside a stunning mudbrick kasbah. Enjoy unprecedented roof access, but do try to stay focused despite the breathtaking oasis just next door."
— News description[3] 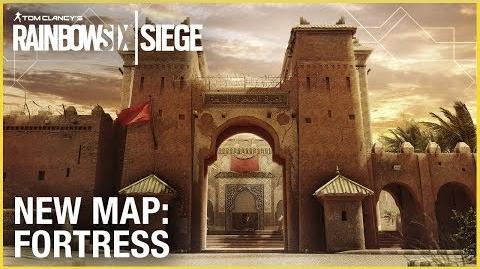 Retrieved from "https://rainbowsix.fandom.com/wiki/Fortress?oldid=51662"
Community content is available under CC-BY-SA unless otherwise noted.