For the mission, see Frost Light

"There are two things the human body needs in a survival situation: Water and hope."
— Frost

Tina Lin "Frost" Tsang is a Defending Operator featured in Tom Clancy's Rainbow Six Siege. She was introduced in the Operation Black Ice expansion alongside Buck.[1]

Tsang was raised in Vancouver, British Columbia. When she turned eighteen, Tsang enlisted with the Royal Canadian Air Force (RCAF). She was sent to the Royal Military College of Canada (RMC) as an Officer Cadet and graduated top of her class. After completing a bachelor's degree in Science and Mechanical Engineering, she completed her officer training and was stationed at CFB Esquimalt with the Joint Coordination Centre Victoria (JRCC Victoria). From there she served on the primary Search & Rescue response team covering BC and the Yukon Territory. She was later invited to join Joint Task Force 2 and eventually Rainbow in 2015.[2]

Tsang has been praised for exceptional situational awareness and is valued for her mission planning and threat action. Tsang is an extremely focused individual who meticulously plans out every move she makes. When she sets her eyes on a goal, there is little that can stop her. Tsang is patient and never takes shortcuts. Her SAR training in mountain-climbing, parachuting, diving extends into her recreational time. Drawing on her background in Mechanical Engineering, Tsang helped design and modify the Sterling Mk2 LHT, or "Welcome Mat," who portable design allows for the discreet deployment in a variety of areas and environments.[3]

I confess I find Tina Lin "Frost" Tsang's energy exhausting. Not many adults make me feel like an old man. She rearranged my shelves during our meeting... It does look better. Not that Tsang is nervous. Far from it. It's more akin to a fine-tuned athlete. […]

Field reports highlight Tsang's focus and perseverance. The team trusts her planning, if not necessarily her fastidiousness. Any disagreements don't appear to hinder the team dynamic since Tsang is open to feedback, though I do detect some resentment from her concerning people who might be less patient or who opt for shortcuts. […]

Tsang's mission planning is meticulous and she brings this same careful viewpoint to her everyday life. A good example was when she told me about her parent's recent anniversary party. She described the traditional Chinese banquet and its ten-coarse meal in such detail, I think she could recreate it from memory. […]

Beyond that, it was a challenge finding a subject outside of operations that excites her. Music? Depends on her mood. Books? Not really. Finally, I asked about her hunting tips. Growing up in British Colombia, Tsang developed a respect for Canada's indigenous cultures and urged me to visit Haida Gwaii territory should I visit West Coast Canada. When I asked about the vague note in her medical records regarding a hunting accident, she was reluctant to talk. Her bush plane made an emergency landing in a range called the Nahanni. Bad weather rolled in and then, a week later, help arrived. Her reluctance to offer details and frequent use of "should have" indicate she feels some shame. Rather than push the issue, I introduced her to Specialist Sannaa "Nomad" El Maktoub. Their similar experiences made them instant friends. Both women share a deep connection to the outdoors. It's not simply being outside -- it's the wild that appeals. […]

Tsang's precision-oriented personality is a huge asset, but I'd like her to consider depper introspection. Her ability to self-actualize will be critical if we continue to have her working alongside other strong personalities such as Specialist Taina "Caveira" Pereira.

Equipped with a floor mounted, rubber and metallic spring loaded leg-hold trap, Tina Lin Tsang uses a non-lethal means of immobilizing her prey. The sleek design of the “Welcome Mat” allows for seamless deployment without extensive camouflage. A completely mechanical device that is undetectable by electronic scanners.[1]


In every sense of the word I believe in synergy. Specialist Tsang and I have good synergy during operations, so I was happy to help run the Welcome Mat through some tests. The Sterling Mk2 leg-hold trap (Welcome Mat) is deceptive in its simplicity and everyone knows it serves as only one highlight of Tina's skill as a trapper.

For the tests, we ran a number of strategies under various conditions. A few suggestions for modifications came up and we'd like to explore them further at a later date. The Welcome Mat has a lot going for it, in particular how it can't be detected by scans. But the best results consistently demonstrate that it should be utilized in conjunction with additional defensive measures. Once the mat is in place, my Gu mine can provide the added defense required. Of course, Bandit's (Specialist Dominic Brunsmeier) batteries and Kaid's (Specialist Jalal El Fassi) electric claw also work very well.

Frost (In-game)
Add a photo to this gallery

Frost's model (Pre-Dust Line)
Add a photo to this gallery 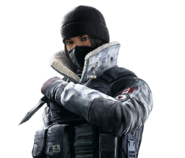 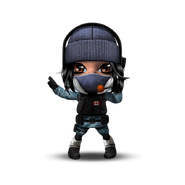 Frost in the Frost Bundle

Frost in The Division Bundle

Frost in the Rock Star Bundle

Frost in the Posh Bundle
Add a photo to this gallery

Frost's Icon
Add a photo to this gallery 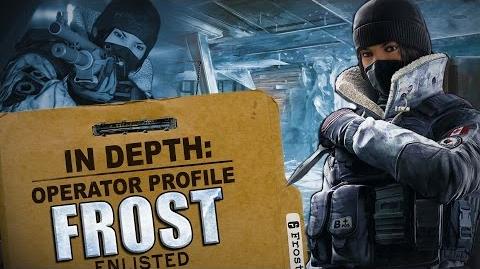 Retrieved from "https://rainbowsix.fandom.com/wiki/Frost?oldid=68575"
Community content is available under CC-BY-SA unless otherwise noted.