"Chaos is only an enemy if you're unable to adapt."
— Fuze

Growing up in a military family in Samarkand, Uzbekistan, Shuhrat Kessikbayev immigrated to Russia shortly before the fall of the Soviet Union. His parents encourage him and his brother to embrace all that was Russian, so it wasn't until his teens when he learned to embrace his Uzbek heritage. Kessikbayev and his brother followed in their father's footsteps and enrolled in the military. Showing an aptitude for science at an early age, the military honed Kessikbayev's interest in mechanical engineering and trained him to be a mechanist.

Kessikbayev applied these skills in numerous engineering projects which landed him a spot in the coveted weapon testing brigade at Alabino firing range near Moscow. During his time in the 27th Motor Rifle Brigade he excelled as a sharpshooter and has extensive weapon knowledge. Kessikbayev was also known to be a member of the Spetsnaz, however, all operation details have remained classified. Kessikbayev's brother also went missing at an unknown point though the details of his disappearance also remain classified.

Developing his own weapon and his ability to improvise in the field with scrap materials and minimal tools made Kessikbayev a legend among his fellow recruits. Despite this, Kessikbayev's methods of breaking down enemy defenses has been seen as reckless by others. In 2004, Kessikbayev had an altercation with SDU Operator Siu "Ying" Mei Lin, who considered him to be a "questionable asset" due to believing that he had a disregard for civilian lives. It was only resolved after FBI SWAT Operator Eliza "Ash" Cohen stepped in.[1][2] Kessikbayev was later recruited in Rainbow in 2015 due to his creative engineering skills which were deemed a critcal asset. Over the next five years, Kessikbayev readily made himself available in team planning and execution of numerous operations against the White Masks. At one point, Kessikbayev was engaged for two years but later called the wedding off due to wanting to take a different path in life.[3]

In late 2020, Kessikbayev was placed on Team Vigil for the upcoming Six Invitational. A few weeks later in 2021, Kessikbayev was invited by Jaimini "Kali" Shah to join her and the other members of NIGHTHAVEN for a training session at the Stadium kill house. At the end of the session, Kali asked Kessikbayev why he hesitated in firing. Kessikbayev explained that Apha "Aruni" Tawanroong was in his line of fire. Kali informed him that it was NIGHTHAVEN's policy to "play hard and take risks" and that friendly fire did not matter as no lives were on the line in the area. Soon after, a NIGHTHAVEN Osprey landed in the arena to deliver a piece of equipment to Kali. Kessikbayev requested to tag along with them to see the equipment which Kali agreed to. While the equipment was offloaded from the Osprey, Kessikbayev asked Kali if it was a problem that each of NIGHTHAVEN's members were on different teams for the Invitational. Kali stated that it wasn't as any accolade earned by a member of NIGHTHAVEN would make their organization more exclusive and allow them to demand higher rates for contracts.

Once inside the Stadium, Kali presented the Masterframe Prototype I to Kessikbayev and the other members of NIGHTHAVEN. Kali explained that it was rated to absorb or deflect most conventional high-caliber rounds. She also stated that it was light weight, increased reaction time, reduced muscle strain, and was sealed against the majority of biological and chemical weapons. Kessikbayev asked Kali if the equipment was Rainbow compliant and was told it was "more or less". Kessikbayev reminded Kali that she was supposed to wear her uniform for the Six Invitational. Kali dismissed Kessikbayev's comment, saying that the Masterframe would be her uniform and that it was only the beginning. Kessikbayev was then told by Kali that her people always had the best equipment and that he knew where to find her if he was looking for a career shift to join NIGHTHAVEN.

Team Vigil was subsequently eliminated from the Six Invitational, losing against Team Capitão and Team Ash.

Kessikbayev is an expert tinkerer and a master craftsman, more at ease with the workings of machines than those of people. His gruff demeanor and curt speech should not be mistaken for misanthropy. He possesses a strong moral conviction.[4]

To say that Specialist Shuhrat "Fuze" Kessikbayev is restrained does not give the full picture. I was reminded of my grandmother's phrase: "talking to him was like pulling teeth." When other operators referred to him as mysterious I thought they were joking. I wouldn't say that he's difficult. He's quite pleasant and hospitable. But he is... contained. It took some work but we finally managed to have a revealing conversation.

Kessikbayev is quiet except with Specialist Timur "Glaz" Glazkov. When he does speak, people tend to hang off his every word. Field reports mention that Kessikbayev readily makes himself available in team planning but often falls into a cone of silence during operations. It's critical that he maintains communications with his team, otherwise there may be further altercations such as the one with Specialist Siu Mei "Ying" Lin regarding civilian casualties. This is doubly critical given some of our operators come from units with "zero casualty" rules.

It was necessary to address past reports about Kessikbayev's recklessness, so I asked him to describe an operation from his point of view. His objective, he explained, is to break down the defense as efficiently as possible, but insists he isn't careless. It's clear that his creative engineering skills are a critical asset. He's highly intelligent and calculating. While hard-hitting, Kessikbayev does possess good situational awareness. I suggested that he concentrate on improving this during future ops.

I was unable to ascertain any details about his brother who is allegedly MIA. That file remains classified. However, I did manage to get Kessikbayev to open up a bit about his personal life. He was engaged for two years but the wedding was called off after he decided it was "not the road to take." A proud Uzbek and a proud Russian, Kessikbayev said that growing up his parents encourage them to embrace all that was Russian, so it wasn't until his teens when he learned to embrace his Uzbek heritage. I asked him to elaborate on the experiences, but in his typical understated way he simply replied, "It was interesting."

"Uses Cluster Charges that pierce and stick to walls, releasing sub-grenades on the opposing side"
— APM-6 "Matryoshka" Description

First developed by Fuze in the Ratnik experimental weaponry brigade, the APM-6 "Matryoshka" was Kessikbayev’s attempt to create a more powerful breach charge. It proved to be an effective means of clearing a room, dealing the most damage to hostiles while keeping the Operator relatively safe. The "Matryoshka" can be anchored either vertically or horizontally. Once deployed, the piston burrows through walls or floors, dispersing live cluster grenades while spinning to deal the most damage from any directions.

The "Matryoshka" is most useful in conditions where collateral damage is not a concern. Not recommended for hostage extractions, or in areas where there is a high risk of friendly fire.

I'll admit I'd already jumped on the device evaluations even before I received the official request. No surprise there, right? Mira always has the R&D lab running at full throttle. So when she asked me to look at Shuhrat's APM-6 Cluster Charge it took me no time at all to write up my report.

I was already familiar with the Matryoshka, having studied its trigger mechanism in relation to my Brimstone Charge. The mechanical assembly is modeled after aerial bomb fuzes when detonation is tied to a fuze with an integrated firing pin. It's less sophisticated than my Brimstone, but it doesn't need that to be effective.

Clearing rooms and flushing out defenders is its primary function and I'd say it operates as designed. It actually has a benefit in that some targets are terrified of the boom. Shuhrat obviously understands the importance of classical conditioning. I just wish it only affected the people he's going up against, but that's the problem, with high explosives - they don't discriminate.

This gadget is a beast. And that's something, coming from me. 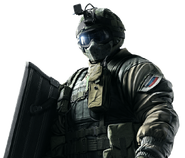 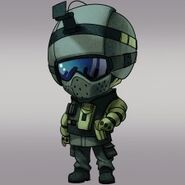 Fuze in the Ghost Recon Set

Fuze in the Constrictor Bundle

Fuze in the Quicksand Bundle 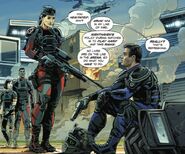 Fuze and Kail as seen in the Six Invitational comic 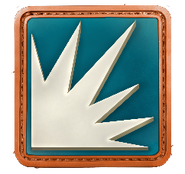 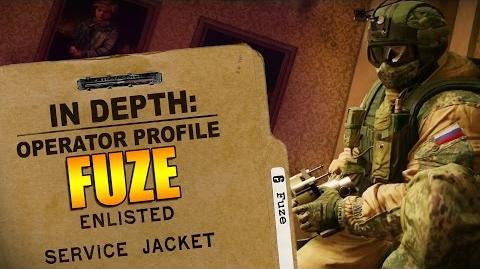