Rainbow Six Wiki
Register
Don't have an account?
Sign In
Advertisement
in: Military Organizations, Factions of Siege, Factions of Extraction

"After the 1972 Munich Massacre, GSG 9 was formed to combat the growing threat of terrorism. Due to a problematic military history, GSG 9 grew from the German Federal Border Guard Service/Police. GSG 9 specializes in mitigating crisis situations, such as hostage-taking, kidnapping, terrorism, and extortion."
— Siege In-game description

The Grenzschutzgruppe 9 der Bundespolizei (Border Protection Group 9 of the Federal Police), commonly abbreviated GSG 9, is a German counter-terrorism and special operations unit. It was created as a result of the Munich Massacre where Germany's law enforcement found itself severely compromised due to their failure to rescue the hostages and stop the terrorists as well as the country's historic relationship to Jews and Israel. 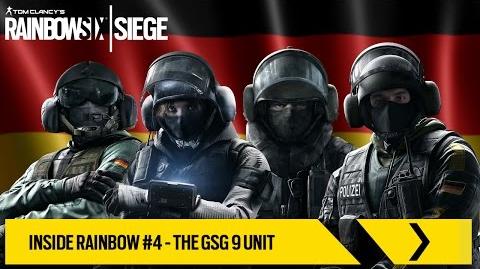