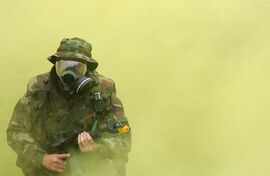 A gas mask is a mask put on over the face to protect the wearer from inhaling airborne pollutants and toxic gases. The mask forms a sealed cover over the nose and mouth, but may also cover the eyes and other vulnerable soft tissues of the face. Some gas masks are also respirators, though the word gas mask is often used to refer to military equipment. Early known gas masks dates back to 1799 with respirator like masks used by miners in Prussia (modern day Germany).

Gas Masks are featured throughout the Tom Clancy's Rainbow Six Franchise as aesthetics for players and do not affect gameplay except in the select titles below.

In early installments of the franchise, gas masks are present in the Bio Uniform.

" This mask protects against airborne chemical and biological agents, and is used by all US Military"
— XM50 In-game Description

Gas masks are present in Tom Clancy's Rainbow Six Extraction as Headgear for various Operators. Gas masks are cosmetic only and have no effect on gameplay. As such, players are still vulnerable to the effects of Blinding Spores and Bloaters.