Edit
watch 01:02
'Rainbow Six' Profile: Glaz
Do you like this video?
Play Sound

"Do you know what an artist and a sniper have in common? Details. Like when a touch of color is out of place. When a shadow does not match with its surroundings. Or when a shape is not where it is supposed to be. The only difference is the stakes. Mine are higher."
— Glaz

Timur "Glaz" Glazkov was born and raised in the seaport city of Vladivostok, Russia on July 2. It was here that his father worked in the shipping industry and Timur studied art in secondary school. In 2004, the deaths that resulted from the Beslan school hostage crisis inspired him to transfer to the Cadet Corps and pursue a career in the armed forces. Afterwards, he attended the Khabarovsk Military Commanders Training Academy where he developed unparalleled marksmanship. He also regularly participated in cross-border training exercise with China where he gained a strong understanding of Mandarin. After the Academy, he joined the Ground Forces of the Russian Federation and later the Spetsnaz 45th Guards Regiment. Assigned to special ops and VIP protection detail, reports consistently show that Glaz possesses a unique creative approach to problem solving. He is the squad member with the most expertise in long-range scoped weaponry.[1]

While Timur doesn't thrive in large groups, he is engaging and expressive in one-on-one conversations. He has a patient temperament and can be very introspective. His background as an artist, his curiosity, and attention to detail has trained him to be mindful and precise. This trait makes Timur an excellent spotter and sniper.[2]

What stands out about Specialist Timur "Glaz" Glazkov is his wit. It's surprising for someone so intensely focused during operations. He won't share his gallows humor with me because he says a civilian wouldn't understand, and he may be right about that. Still, I find him engaging in our discussions.

Glazkov possesses many traits expected of a highly-trained marksman and field reports demonstrate his knack for improvising in tough situations. His ability to deconstruct complex concepts on the fly likely comes from his artistic sensibilities.

I asked what his influences were when he was studying since Vladivostok was quite remote back then. As Glazkov's father worked in shipping, he had access to plenty of bootleg music and books.

His paintings are vibrant - expressive. They're more than an escape, perhaps a spiritual cleansing or a depiction of how he perceives suffering, but I'm far from a qualified art critic.

He grew up in the Far East, and his exercise at the Academy included cross-border training with China. His knowledge of Mandarin and China's culture should prove useful.

The rest of his upbringing seems typical: Getting into trouble, getting himself out again. Early operational reports are - lets say a tad thin. And while he's clearly self-aware, he's not willing to discuss much with me.

Glazkov is well-respected by his team. His humor and observational skills make him tolerant of personality extremes and he seems to be among the few operators who strategizes well with Vicente "Capitão" Souza. He laughs when Alexsandr "Tachanka" Senaviev tells him it's because he too almost lost an eye.

The mark on his right eye - a scar - is from weapon kick, though his smile leads me to believe that's not the whole story. I've noticed he subconsciously rubs it when he's bothered. It may be nothing, or it may be his "tell," if how he plays poker with the FBI SWAT contingent is anything to go by.

A Medium Health Operator, Glaz's unique gadget is an HDS Flip Sight for his OTs-03 marksman rifle. Whilse aiming down sights with it, it also comes with a Thermal Feedback System which can outline long-range marks even through smoke for easier shooting.

The HDS Flip Sight was developed by the Spetsnaz for Russian snipers to use in tactical situations where the range of targets may vary greatly in a short amount of time.


The OTs-03 high-powered sniper weapon of Specialist Glazkov's (Glaz) exceeds all previous Russian designs. I've always been eager to try it. Since I happen to be a marksman in my own right, R&D Director Elena "Mira" Alvarez choose me to test it - under the sharp eye of Glaz. (It's not his staring that unnerves you, it's that he sketches you while he does it...) The single-point cut-rifled barrel is a key reason this weapon is so effective. There's no stress on the barrel and no wobble or drift. So if you still miss it's because you aren't Glaz. Even a precision weapon as good as this isn't much without the HDS Flip Sight. The OTs-03 has an integrated rail for mounting optics with a tandem configuration allowing quick access to the HDS. This thermal detection is a point of pride and contention among operator discussions. This weapon provides faultless technical backup for someone with faultless skill. 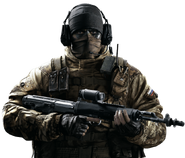 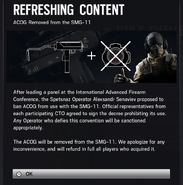 Refreshing Content (The removal of the ACOG from the SMG-11)

Glaz and Galanos in the Velvet Shell mid-reinforcement artwork

Glaz in the Ambush Bundle 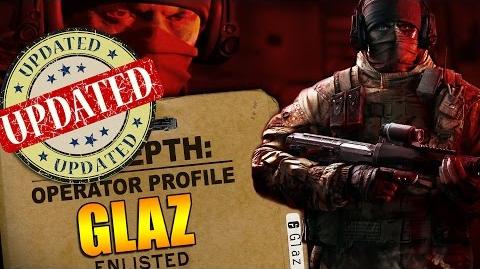