The Glock is a brand of polymer-framed, short recoil-operated, locked-breech semi-automatic pistols designed and produced by Austrian manufacturer Glock Ges.m.b.H. The firearm entered Austrian military and police service by 1982 after it was the top performer in reliability and

Glock pistols have become the company's most profitable line of products, and have been supplied to national armed forces, security agencies, and police forces in at least 48 countries. Glocks are also popular firearms among civilians for recreational and competition shooting, home- and self-defense, both in concealed or open carry.

Several variants of the pistol are featured in the Tom Clancy's Rainbow Six Franchise:

The Model 17 is a weapon featured in Tom Clancy's Rainbow Six 3: Raven Shield. It was introduced in the Iron Wrath expansion.

The Model 17 is an extremely reliable, lightweight weapon. Designed with a smooth double action and no exposed hammer it is ideal for close combat and concealed carry situations.

"Developed and adopted by the Austrian Army, this pistol is very popular with police forces and military organizations around the world. Normally the G19 uses the High Capacity Magazine or Suppressor attachments."
— In-game description

The G19 Compact is a weapon featured in Tom Clancy's Rainbow Six: Lockdown.

The Glock 18 is a weapon featured in Tom Clancy's Rainbow Six: Vegas.

It is the only select-fire handgun in-game, and it can not be fitted with a suppressor like other pistols in-game (excluding the Desert Eagle and Raging Bull).

The G18 is a weapon featured in Tom Clancy's Rainbow Six: Vegas 2. Since Vegas 1 and 2 share the same engine and models, it appears in the same configuration as its Vegas 1 counterpart. Once again, it is the only select-fire handgun in-game, and it can not be fitted with a suppressor. 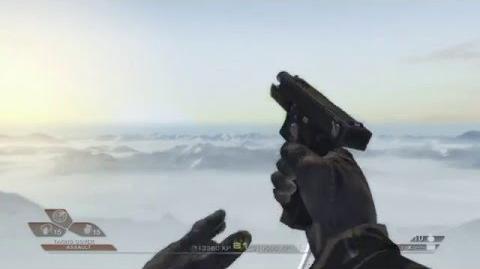 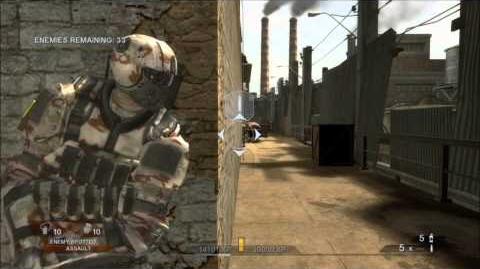