Golden Gun is a limited-time gamemode introduced to Tom Clancy's Rainbow Six Siege in the Operation Void Edge expansion. Playable in the Arcade playlist, the mode was available from March 19, 2020 to March 23rd, 2020.[1][2] The mode returned on October 1st, 2020 and was available until October 5th, 2020.[3]

The mode is a variant of Secure Area and was only available on Oregon. The gamemode does not have a planning phase as the Attackers already know the whereabouts of the objective. Each player only has access to a D-50 adorned with the golden Extravagance weapon skin. The weapon is a one-hit kill to all players but will need to be reloaded after every shot. Knifing is possible which can make up a missed shot. Rounds are won once all players on the opposing team have been eliminated or the area is secured.[4]

The second incarnation of the mode retains all of the rules and gameplay modifiers as Golden Gun 1.0 in addition to the ban of the Deployable Shield. As a result, all defending Operators are given a temporary alternative such as the Bulletproof Camera. The mode is available on Border, Coastline, and House. 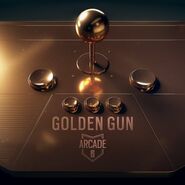 Retrieved from "https://rainbowsix.fandom.com/wiki/Golden_Gun?oldid=79031"
Community content is available under CC-BY-SA unless otherwise noted.