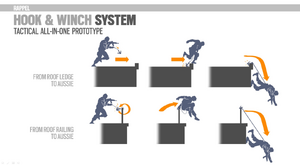 The Grappling Hook is a gadget featured in Tom Clancy's Rainbow Six Siege and Tom Clancy's Rainbow Six Mobile. Usable for all Attackers, it allows the ability to rappel up walls to reach windows or the roof. While rappelling, players have freedom of movement on the surface they are climbing on and can also hang upside-down for new angles of approach. Players can use their weapons and equipment while rappelling, but shield users will stow their shield while hanging.

When rappelling, Attackers can swing into open windows and holes, or through Barricades that have taken enough damage. Attackers can also place Breach Charges on Barricades and can jump through the Barricade if they detonate the charge in the process. The Grappling Hook is exited by pressing navigate or by holding the "Fast Rappel" button.